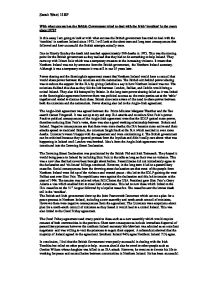 With what success has the British Government tried to deal with the Irish 'troubles' in the years since 1972?

With what success has the British Government tried to deal with the Irish 'troubles' in the years since 1972? In this essay I am going to look at with what success the British government has tried to deal with the 'troubles' in northern Ireland since 1972. I will look at the short term and long term consequences that followed and how successful the British attempts actually were. Due to b****y Sunday the death told reached approximately 500 deaths in 1972. This was the turning point for the British government as they realised that they had to do something to help Ireland. They came up with Direct Rule which was a temporary measure to the increasing violence. It meant that Northern Ireland was run by someone from the British government, the Northern Ireland secretary. Although it was a temporary measure it was still in use 25 years later. Power sharing and the Sunningdale agreement meant that Northern Ireland would have a council that would share power between the unionists and the nationalists. ...read more.

Negative consequences are that there were more deaths; the IRA became more active and their attacks spread to mainland Britain, the unionists fought back at the IRA which resulted in even more deaths. Unionist's weren't happy with the agreement and were condemning it. The British government can be criticized because they ignored protests from the loyalists and didn't really care about what was happening in Ireland until London was bombed. Idea's from the Anglo-Irish agreement were introduced into the Downing Street Declaration. The Downing Street Declaration was proclaimed by the British PM and Irish Taioseach. They hoped it would bring peace to Ireland by including Sinn Fein in the talks as long as their was no violence. This was a new idea that had never been brought about before. Paramilitaries did not immediately agree to the declaration and 't*t-for-tat' killings continued. However, in the long term it led to a paramilitary ceasefire. Social consequences from the downing street declaration are that most of the people from Northern Ireland were fed up of the violence and wanted peace - this led to the SDLP gaining the west Belfast seat over Sinn Fein. ...read more.

The Good Friday agreement used many positive ideas such as a new assembly which would require consent of both communities in the province. Short term consequences include immediate disproval of paramilitary prisoners however the northern Ireland secretary Mo Mowlam was admired as an excellent negotiator and was willing to visit the prisoners to regain their support. A referendum showed that the majority of Ireland agreed to the agreement. Southern Ireland 94% agree Northern Ireland 71% agree. In conclusion, I feel that the British Government were partly successful in dealing with the Irish Troubles but relied on other people to help. success should also be owed to other people such as Gordon Wilson whose daughter was killed in an IRA attack. However, he went on to devote his life to working for peace and reconciliation between communities in Northern Ireland. He has been successful because he helped to change the attitudes of ordinary people. This helped with the overall success of the British Government as he made people compromise and made it almost acceptable for different parties so sit around a table and discuss their opinions. ?? ?? ?? ?? Sarah Ward 11RP ...read more.