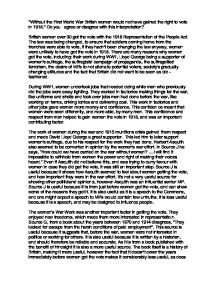 ''Without the First World War British women would not have gained the right to vote in 1918.'' Do you agree or disagree with this interpretation?

''Without the First World War British women would not have gained the right to vote in 1918.'' Do you agree or disagree with this interpretation? British women over 30 got the vote with the 1918 Representation of the People Act. The law was being changed, to ensure that soldiers coming home from the trenches were able to vote, if they hadn't been changing the law anyway, women were unlikely to have got the vote in 1918. There are many reasons why women got the vote, including: their work during WW1, Lloyd George being a supporter of women's suffrage, the suffragists' campaign of propaganda, the suffragettes' terrorism, the desire of MPs to not alienate potential voters, society's gradually changing attitudes and the fact that Britain did not want to be seen as old-fashioned. During WW1, women undertook jobs that needed doing while men who previously did the jobs were away fighting. They worked in factories making things for the war, like uniforms and shells and took over jobs men had done before the war, like working on farms, driving lorries and delivering coal. This work in factories and other jobs gave women more money and confidence. ...read more.

vote in 1918, because of the cumulative effect of women's work during the war, and the law change to allow homecoming soldiers to vote. Without it, it is very unlikely that women would have got the vote when they did. The Prime Minister and many MPs were supporters of women getting the vote. Many MPs thought women would be getting the vote soon anyway, and if they were seen as being anti-women they could alienate potential voters. Much of the Government thought women would vote like their husbands, so the effect would be more votes for them. Many MPs were hostile to women's votes in 1912. For example a Conservative leader, Lord Curzon said "Women do not have the experience to be able to vote...[The] way women have been educated, their lack of strength and the duties they have" (Source F). This is useful for describing how MPs felt and suggests that something had to modernise the views of people of the time, bringing them into the 20th Century. It is less useful because it doesn't tell us how MP's attitudes might be changing anyway or whether everybody's attitudes were similar. ...read more.

The world was becoming more and more modern, and Britain didn't want to seem old-fashioned or 'stuck in the past' . This may have encouraged many Brits to support women's suffrage - especially since Germany gave women the vote - whilst we were at war with Germany, no-one wanted to be less modern than the enemy! Britain was under 'peer-pressure' from the rest of the world, and we wanted to be as modern as everyone else - it was inevitable that this would mean women got the vote eventually - though World War One probably sped this up and got women the vote in 1918. Overall, I think that without the First World War, women may not have got the vote in April 1918, although I think that they may have got the vote very soon afterwards anyway. The Government would certainly have wanted people to think that women were gaining the right to vote because of their actions during the war. It would not have been a good idea for the Government to be seen to be giving in to terrorism at a time when the IRA were attempting to secure Home Rule for Ireland. In the end, World War One was a catalyst in getting women the vote, but they would have got it in the first half of the 20th Century anyway. ...read more.

This is a very thorough and detailed response that shows strong understanding of the source material and awareness of the need to consider its provenance. The author reaches a sound judgement and links sources to knowledge now although some points on reliability could be questioned. 5 stars.