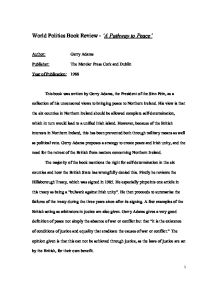 World Politics Book Review - 'A Pathway to Peace' Author: Gerry Adams Publisher: The Mercier Press Cork and Dublin Year of Publication: 1988 This book was written by Gerry Adams, the President of the Sinn F�in, as a collection of his uncensored views to bringing peace to Northern Ireland. His view is that the six counties in Northern Ireland should be allowed complete self-determination, which in turn would lead to a unified Irish island. However, because of the British interests in Northern Ireland, this has been prevented both through military means as well as political veto. Gerry Adams proposes a strategy to create peace and Irish unity, and the need for the retreat of the British from matters concerning Northern Ireland. The majority of the book mentions the right for self-determination in the six counties and how the British State has wrongfully denied this. ...read more.

He states that the sovereignty of the unionists, which make up a national minority, is in direct contravention of the principle of self-determination. The British claim that it is the wish of the people of Northern Ireland that no change in Northern Ireland's status is made, while Gerry Adams says that this is only the case for the unionist minority. A strategy for peace is then outlined with an aim, the development and implementation of certain strategies, and the development and support of programmes to increase popular, political and economic support. There is also a mention of the change in the SDLP's willingness to confront the Sinn F�in openly in discussions, in a positive direction. Finally Adams talks about the necessity to build a mass movement of support to further the cause of self-determination. ...read more.

The book generally gives reasonable solutions to the problems, although I felt that most would result in little. My main disagreements with Adams in the book lie in his views of the policies Ireland should adopt after a possible unification. He believes that a certain amount of Protectionism is needed and that Ireland should aim for neutrality. I believe that if or when Ireland becomes united, it will be through the support of other countries. For Ireland to then 'isolate' herself would create little incentive for such support, as well as being the least effective method for fast economic growth. The book gives some good factual and ideological knowledge on the situation in Northern Ireland, even though it was written in 1988. It is easy to read, but demands some prior knowledge to the dispute. It is also written by one of the leading political activists involved in the civil rights struggle and therefore gives a better idea of the wishes of the Sinn F�in. ?? ?? ?? ?? 1 ...read more.