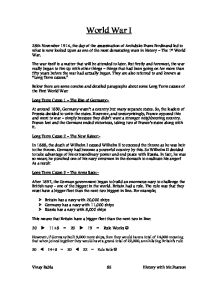 World War 1 - long and short term causes of the war.

World War I 28th November 1914, the day of the assassination of Archduke Franz Ferdinand led to what is now looked upon as one of the most devastating wars in history - The 1st World War. The war itself is a matter that will be attended to later. But firstly and foremost, the war really began to fire up with other things - things that had been going on for more than fifty years before the war had actually began. They are also referred to and known as "Long Term causes." Below there are some concise and detailed paragraphs about some Long Term causes of the First World War: Long Term Cause 1 - The Rise of Germany:- At around 1850, Germany wasn't a country but many separate states. So, the leaders of Prussia decided to unite the states. However, and unsurprisingly, France opposed this and went to war - simply because they didn't want a stronger neighbouring country. France lost and the Germans ended victorious, taking two of France's states along with it. Long Term Cause 2 - The New Kaiser:- In 1888, the death of Wilhelm I caused Wilhelm II to succeed the throne as he was heir to the throne. Germany had become a powerful country by this. So Wilhelm II decided to take advantage of his extraordinary power and end peace with Russia. In fact, he was so mean; he punched one of his navy crewmen in the stomach to eradicate his anger! ...read more.

Since then, they had been regretting the moment - every last second of it. So, 28th June is a day for remembering the martyrs who died trying to prevent separation. Gavrilo, assassinator of Franz Ferdinand, was not an ordinary Serbian citizen. He was a person with nothing to lose; for he was dying of Tuberculosis - a rare and infectious disease. Gavrilo was thought to have caught it due to lack of food or "malicious"/"raw" food, as his parents were so poor, they couldn't feed him adequately. However, they still had to pay tax to the Austro Hungarians - yet another motive for the assassination. Colonel Dragutin Dimitrijevic, a.k.a. Apis, was the leader of The Black Hand (the gang used to reunite Serbia) and most importantly, the plotter who took control of everything. At the time of the assassination, Apis was 56 years old - 7 years younger than Franz Ferdinand. Apis knew Franz Ferdinand was here only for one reason - to make peace with the Bosnia while persuading them not to reunite with the foes of the Austro Hungarians - the Serbians. However, Apis wanted one thing and one thing only - to make sure that Franz Ferdinand couldn't get anywhere near the Serbians - even if it meant killing him. For 10 years, Apis had tried reunite Serbia and Bosnia but had failed on numerous occasions. This time though, he wanted his treacherous plan to work and end up with a message from the Black Hand members reading: "Mission Accomplished." ...read more.

At first, Serbia was safe because Austro Hungary had nothing against them. Although suspicions were immediately aroused, nothing was found to proof the origin of the plot. However, just hours later, Danilo Izic was found at a tip-off and later lost his cool when he was asked questions about what happened. In fact, he ended up telling everything; every last detail except for the fact that Apis was behind it. However though, Apis ended up caught and was beheaded for his plot behind it. Furthermore, Austro Hungary had grasped a reason to go to war with the Serbians and the war commenced 6 weeks later. Gavrilo Princip and Vaso Cubrilovic died of Tuberculosis and nothing meant more than the fact that the job was done. My Opinion - "The One That Matters" Considering the rivalry and conflict between the two sides in the war, I think that the war would have gone one even without the assassination of Gavrilo Princip. I think that the Austro Hungarians would have eventually found a reason to attack Serbia and the war would have gone through exactly the same way with the exception of one - the victims as a result of the war. I think that since the Serbians thoroughly planned the assassination, it was a good enough reason for many people to get involved. However, if a minor reason caused the war, then I think less lives would have been claimed. Nevertheless, a war is a war and therefore, I can sum up this essay with a single sentence: "The death of one man was known to have claimed the lives of 20,000,000 others..." ?? ?? ?? ?? Vinay Babla 8S History with Mr.Pearson ...read more.