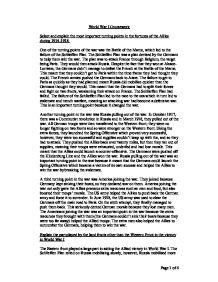 World War I Coursework Select and explain the most important turning points in the fortunes of the Allies during 1914-1918. One of the turning points of the war was the Battle of the Marne, which led to the failure of the Schlieffen Plan. The Schlieffen Plan was a plan devised by the Germans to help them win the war. The plan was to attack France through Belgium, the target being Paris. They would then attack Russia. Despite the fact that they won at Alsace-Lorraine, the Germans didn't manage to defeat the French at the Battle of the Marne. This meant that they couldn't get to Paris within the time frame they had thought they could. The French armies pushed the Germans back to Aisne. The failure to get to Paris as quickly as they had planned meant Russia did mobilise quicker than the Germans thought they would. This meant that the Germans had to split their forces and fight on two fronts, weakening their attack on France. The Schlieffen Plan had failed. The failure of the Schlieffen Plan led to the race to the sea which in turn led to stalemate and trench warfare, meaning an attacking war had become a defensive war. This is an important turning point because it changed the war. Another turning point in the war was Russia pulling out of the war. ...read more.

Gallipoli was a disaster and only managed to kill many Allied troops; therefore Gallipoli didn't manage to help the Allies to win World War I. What was the most important front in bringing about Allied victory in World War I, the war at sea or the war in the air? I think that the war at sea was most important to Allied victory. I plan to look at how both the war at sea and the war in the air between three time periods: 1914, 1915-1917 and 1918. In 1914, the war at sea was most important. The early war at sea was very important, without control of the seas, Britain would have been isolated from its allies, and so keeping control meant they weren't cut off. Another important point of the war at sea was the fact that Britain used boats to carry troops and supplies to the Western Front, without which they wouldn't have been able to fight. In 1914, the British began to use blockades to starve Germany into surrendering; however, it took two years for Germany to feel the full effects of this. The war in the air was far less important during 1914. The planes were fragile and not used in combat. They were, however, used for observation, which should have been useful to the Allies, but it seems that it made little or no impact, as they didn't do very well at the beginning of the war. ...read more.

Another important part of the war at sea were the blockades. The blockades were vital in 1918 because they meant that Germany was short of food and nitrates, which were used as fertilisers for farming (further worsening the food shortage) and for making explosives. Due to the shortage of food, the Germans were forced to launch the Spring Offensive. However, due to the fact that supplies couldn't keep up with troops and the offensive failed. This meant the Allies could launch a counter-offensive, helping them win the war. During 1918, the war in the air gained more importance, with the R.A.F. being formed. This shows that aeroplanes were more important than they had been at the beginning of the war. Planes used to help defeat the Turkish army - an ally of Germany, again showing they had improved. However, the war at sea was far more important during 1918 because it helped the Allies a lot, especially with the Spring Offensive, whereas the war in the air only helped in a less major war. Overall, due to the fact that the war at sea played such a vital role in the Spring Offensive and the U.S. entry, I think that it's the most important. Also, at the beginning of the war, aeroplanes had never been used in combat and so the war in the air didn't play much of a role in the majority of the war. ?? ?? ?? ?? Page 1 of 4 ...read more.