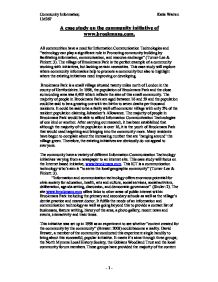 A case study on the community initiative of www.brookmans.com.

A case study on the community initiative of www.brookmans.com. All communities have a need for Information Communication Technologies and "technology can play a significant role in Promoting community building by facilitating information, communication, and resource exchange" (Turner-Lee & Pinkett: 3). The village of Brookmans Park is the perfect example of a community working with initiatives, but lacking certain necessities. This case study will explore where community informatics help to promote a community but also to highlight where the existing initiatives need improving or developing. Brookmans Park is a small village situated twenty miles north of London in the county of Hertfordshire. In 1998, the population of Brookmans Park and the close surrounding area was 6,400 which reflects the size of this small community. The majority of people in Brookmans Park are aged between 16 and 59 and the population could be said to be a growing one with ten births to seven deaths per thousand residents. It could be said to be a fairly well off commuter village with only 2% of the resident population claiming Jobseeker's Allowance. The majority of people in Brookmans Park would be able to afford Information Communitcation Technologies of one kind or another. After carrying out research, it has been establsihed that although the majority of the population is over 16, it is the youth of Brookmans Park that would need targetting and bringing into the community more. ...read more.

Therefore, in order to ensure that none of the community is excluded, either Internet access for all would have to be ensured or a daily paper based initiative could be introduced to run along side the Internet site. However, the latter is probably the most efficient suggestion as a paper based initiative would be extremely expensive and the majority of the residents would not appreciate daily news of the community being pushed onto them. It would much more effective to just provide some thing where the community could access a local community if and when they wanted too. This is an area that would need to be revised in the future in order to maintain a sense of community. Also, when looking at this internet based initiaitve, one must consider whether a village like Brookmans Park needs some thing that would promote face-to-face contact rather than online communities? "The internet may be diverting people from "true" communities because online interactions are inherently inferior to face-to-face and even phone interactions" (Wellman: 5). To en extent, www.brookmans.com proves that this argument is unjust and invalid. The members of Brookmans Park, gain their sense of community through the web pages. It has been extremely successful and nothing would be gained thourgh replacing it. Therefore, instead of introducing another intitaive that would merely promote face-to-face interactions, www.brookmans.com should be extended to include both. ...read more.

However, as I have mentioned before, there is some exclusion and the community would have to target this in the future to ensure all of the community were to be included. The ICT is a tool that is working towards fulfilling all of the needs and wants of the community. As mentioned above, it is far from being a finished project and could be progressed to a much more inclusive and beneficial initiative. At the moment, it promotes civic activism for certain members of Brookmans Park and from the established make up of the community one could assume that the majority of the 16-59 year old members would be included. Therefore, it is the minority that would have to be targeted, helped and provided with help, teaching and access. Brookmans Park has a strong business based community and this would be incorporated into the ICT and therefore given the opportunity to grow. Ultimately, access would be provided to computers and the Internet for the whole community of Brookmans Park. Initial training and encouragement would be offered to those who were not confident with the technologies. It would be hoped that within time the initiative would start to pay for itself and the people of Brookmans Park would provide regular community contributions to the web site to keep it up to date and interesting. Communication and information is a vital part of every human's life and with a few years development and funding from local businesses and interested parties, the ideas suggested in this case study of an Internet caf� could become a reality. ...read more.