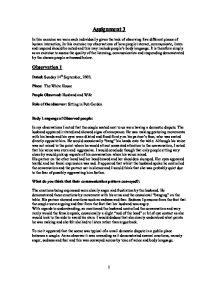 Assess the quality of the listening, communication and responding demonstrated by the chosen people witnessed below.

Assignment 3 In this exercise we were each individually given the task of observing five different pieces of human interaction, In this exercise my observations of how people interact, communicate, listen and respond should be noted and this may include people's body language. It is therefore simply as an exercise to assess the quality of the listening, communication and responding demonstrated by the chosen people witnessed below. Observation 1 Dated: Sunday 14th September, 2003. Place: The White House People Observed: Husband and Wife Role of the observer: Sitting in Pub Garden Body Language of Observed people: In my observations I noted that the couple seated next to us were having a domestic dispute. The husband appeared irritated and showed signs of annoyance. He was making gesturing movements with his hands and his eyes were dilated and fixed firmly on his partner's face, who was seated directly opposite him. He would occasionally "bang" his hands onto the table. Although his voice was not raised to the point where he would attract unwanted attention to the conversation, I noted that his voice was stern and aggressive. I would conclude though that only people sitting very close by would pick up aspects of his conversation when his voice raised. His partner on the other hand had her head bowed and her shoulders slumped. ...read more.

What can you learn from that observation about your own communication patterns?: I noted that this couple have demonstrated basic emotions that are generally shown in an argument. In order to assess this situation I required the ability to listen carefully and observe closely without giving the appearance I was intruding or listening in. Observation 2 Date: Monday 15th September, 2003 Place: Willowbrook School. People Observed: Two Females Role of the observer: Waiting At School Gates Body Language of observed people: Two female friends appeared to be engaged in a happy conversation. Both were standing whilst their children played close by. They would occasionally glance to check that their children were being good. Both people appeared cheerful and their eyes were smiling. What do you think that their communication pattern conveyed?: Both people appeared to be good friends and relaxed in each other's company. Certain references were made to past events they had endured or shared together. Both appeared understanding of the other, with reference made to past events or circumstances they both shared. The outcome was where both people agreed on the subjects discussed, mainly about children and how difficult they can be. Yet this was stated in a funny way where both parents could relax and relate to each other's opinion on parenthood. ...read more.

For myself it was rewarding in the fact that I observed how my son interacts with other children. Communication skills and body language observed, some of which I would usually never notice. What can you learn from that observation about your own communication patterns?: As the two subjects were children it would in my opinion be difficult to relate to the level of communication. It was clear to see that basic emotions are quickly incorporated into a child's learning and understanding. This was possible due to their own observations of adults interacting around them. This showed myself that I was perhaps similar to the two being watched when I was around their age. Observation 4: Date: Tuesday 17th September, 2003. Place: Tesco's Superstore People Observed: Male Customer and Female Cashier. Role of the observer: Standing In Queue Body language of observed people: The Cashier made occasional eye contact with the man and she smiled as they chatted. What do you think that their communication pattern conveyed?: Mainly flirtatious emotions were expressed, The cashier showed embarrassment by blushing However she didn't appear uncomfortable as the man was chatting in a friendly, joking and relaxed manner. The listening was strong on the cashier's part as apart from eye contact she would simply smile and answer the man clearly and in a friendly manner. ...read more.