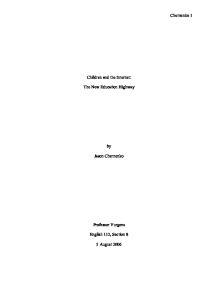 Children and the Internet: The New Education Highway

Children and the Internet: The New Education Highway by Jason Chernenko Professor Yurgens English 112, Section 8 5 August 2006 Outline I. Introduction A. Information on the Internet 1. Definition of the Internet 2. New source of information B. Thesis statement: The use of the internet for children can be effective, but on the other hand it can be very dangerous if not controlled properly. II. The problems associated with the Internet A. Control 1. Censorship 2. Misconceptions of the Internet B. Internet protection 1. Real life today 2. Children's access to pornography and crime III. Using the Internet in a classroom A. Selected opinions 1. Administration 2. Teachers 3. Parents 4. Students IV. How using the Internet in classrooms is beneficial A. Enhances learning 1. Positive effect on achievement within all major subjects 2. Positive effect on student attitudes towards learning 3. Makes learning more self-centered VI. Conclusion A. Remain informed 1. Amount of pornography 2. New sites B. Educator responsibilities 1. Censorship by educators As an educator you see and hear terms like the Internet, Cyberspace, and information super highway daily; it sounds exciting, but what is it really? Is it useful and relevant to daily life and school curriculum? ...read more.

In many ways, using the Internet can be a great tool in educational systems K-12. A high school principal points out that, "Using the Internet in a classroom can be a beneficial tool to many students. By students having the access to the Internet they are able to explore further into certain areas of all major subjects that may not be covered during a class lecture" (Jackson). I also spoke with a current school teacher. The participating teacher I spoke to regarding Internet usage in schools is an elementary Spanish teacher. The teacher agreed using the Internet in her classrooms has a large impact on students learning ability with the foreign language Spanish (Zwerk). The teacher explained that there is an online translator students are allowed to use while working on in class homework (Zwerk). To further investigated the matter, "If children K-12 should have access to the Internet" I spoke to a parent of an elementary child and high school child on her opinion and she replied with, "I think it is a good idea, as long as the child is being monitored by school staff (Cleinsmith)." The parent went on to say, "I do not think it's a great idea for teachers to show the younger children how to get online and do things online though, that should be dealt with through parenting" (Cliensmith). ...read more.