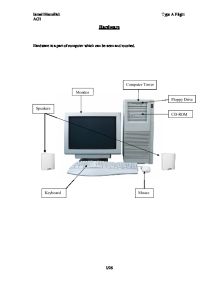 Hardware Hardware is a part of computer which can be seen and touched. Types of hardware There are 4 main types of hardware as shown below: Input: A hardware which is used to put data. Process: Turns input data into different type of data. Storage: A hardware which keeps data safe. Output: Takes out the input data from a computer. The list below shows which hardware's I used: Input: keyboard, mouse and scanner. Process: 3.0 GHZ processor. Storage: 512 MB RAM, USB, 80 GB SATA Hard disk. Output: monitor and printer. This table shows which hardware's I used to complete my coursework. Name of device Price The way it works Advantages Disadvantages CRT Monitor �19.99 Pc world It contains millions of small blue, red and green phosphor dots which glow, when it is hit by an electron beam which goes across the screen to create an image which you will be able to see. http//www.howstuffworks.com CRT stands for Cathode Ray Tube. The picture on a monitor is made up of thousands of tiny coloured dots called pixels. The quality and detail of the picture depends on the number of pixels that the monitor can display. The higher the number of pixels, the better quality the output. It is very cheap compared to TFT monitors so people can afford them. It is a bit noisy so for libraries and offices it won't be useful. It can handle a multiple resolution whereas a TFT cant. It creates to much heat which people don't like. Because it is fatter than TFT monitors, it is harder for the screen to get damaged. Because it is so fat It needs a lot of room compared to TFT monitor. Mechanical Mouse �2.99 Pc world It has 2 wheels which are in touch with the ball. The wheels are set up at a 90� from each other so 1 senses the forward and backward while the other senses left and right. ...read more.

It is much easier to use than CLI because commands need to be learnt on CLI. When it's not properly built it can be very hard to use/work with. It is much more attractive than CLI. It generally requires more memory resources than a non-graphical one. It can be user friendly and speed up the users work. It takes up a lot of space on the hard disk. CLI The main function is to let a user type commands with a keyboard instead of clicking on icons to interact with the computer. The RAM doesn't need much memory to use this type of interface. The commands can't be guessed, it has to be learnt from before. It is much faster the GUI if the user knows all the commands. It can be confusing for the people who don't know the commands. It does not require windows to run it for a user. A spelling error can make the command fail. Operating software I used and why? The operating software I used was GUI (Graphical User Interface) and the version was Windows 7. If I had used Microsoft 98 or any other old version then my computer would probably work so slowly. Also some applications like Microsoft office Word won't work properly because Microsoft 98 won't be able to cope with the more Microsoft. If I had used CLI (Command Line Interface) it would have been much difficult for me and it would have taken me so much time to do my work because I would have to learn so much commands. Another disadvantage is that I don't know how to use CLI at all so it would have also taken me a long time to learn how to use it. Application Software These are the applications I used. Microsoft Publisher Microsoft Word Paint Internet Explorer This table shows all the applications I used to complete my coursework Name of Application Price Main Functions Advantages Disadvantages Microsoft Publisher �49.99 The main function of Microsoft publisher is to create websites, documents, cards, almost everything ETC. ...read more.

Because it is fatter than TFT monitors, it is harder for the screen to get damaged. Because it is so fat It needs a lot of room compared to TFT monitor. After I looked at the different output devices, my work has not really affected me in any sort of way. However I have used the best possible outputs devices for my task. which helped me a little bit. Conclusion The system that I used for this task was the right one because it has all the applications and programs that I needed to do my work successfully and correct with no mistakes or errors. There is one more hardware that was used for the company. It is shown below. Name of Hardware The way it works The way it will be used by the company DSL Modem DSL modems use telephone lines; the reason for it using it is that they have a very high speed connection. This DSL modem is specifically used mainly for the reasons of sending specific signals through telephone lines. When the modem, that sends signals through telephone lines, sends the digital data, its first action is to change this digital data into a signal to help the telephone line recognise it. Then this telephone line has to transport the signal to a modem that has the job of receiving, which then changes this signal back into the form of digital data the computer can use to present to the user. The way it will be used by the company is that they will sponsor or advertise their travel agency on the internet to help get as much customers as possible. Also to give their latest information about their offers worldwide. Choosing and Describing Applications =3 Describing using Hardware =3 Describing using Software = 3 Characteristics, Benefits, and drawback of each system = 6 Demonstrate use of Input Methods = 1 Comment on their speed, accuracy and validation = 4 Describe your system outputs = 1 Comparing Output devices Alternative outputs and drawbacks to your system= 4 ?? ?? ?? ?? Ismail Bismillah Type A Flight AO1 1/26 ...read more.