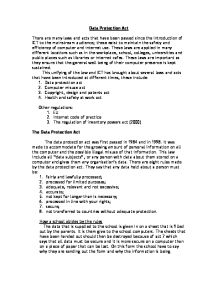 Data Protection Act There are many laws and acts that have been passed since the introduction of ICT to the mainstream audience; these exist to maintain the safety and efficiency of computer and internet use. These laws are applied in many different locations such as in the workplace, school, colleges, universities and public places such as libraries or internet cafes. These laws are important as they ensure that the general well being of their computer presence is kept sustained. This unifying of the law and ICT has brought about several laws and acts that have been introduced at different times, these include: 1. Data protection act 2. Computer misuse act 3. Copyright, design and patents act 4. Health and safety at work act Other regulations: 1. EU 2. Internet code of practice 3. The regulation of inventory powers act (2000) The Data Protection Act The data protection act was first passed in 1984 and in 1998. It was made to accommodate for the growing amount of personal information on all the computer and the possible illegal misuse of that information. This law include all "data subjects", or any person with data about them stored on a computer and gives them any organisation's data. There are eight rules made by the data protection act. They say that any data held about a person must be: 1. ...read more.

This is so if they breach the code then the company can't be prosecuted. Also when making an account then you are asked weather hotmail can share information with third person parties. If you don't check the box then hotmail cannot legally send information. Hotmail also has to say what they are going to do with the information. They will say this in the terms and conditions screen. Evaluation The data protection act protects How Legislation Affects a Working Adult In nearly all workplaces today ICT is used today. It used for computers, servers, printers and fax machines. Now because of all these different technologies there are now many laws. My dad Paul Fairburn has to follow these rules and stay on the right side of the law. If he doesn't then he may risk losing his job. The main law that affect my dad is health and safety. Health and Safety act at work The health and safety at work act (1974) is the main piece of health and safety legislation. When my dad enters his workplace he gets a talk about the rules and safety of the workplace. This would include things like the route to the fire escape. There are many different rules for the manager needs to follow. ...read more.

This means that even if the hacker gets into the computer then they would then to decipher the information to make it readable. The use of computer to hold all the information instead of it being written is much more secure. It is more secure because there are more ways to protect the data than a four digit code. It also has its downsides though because it means that the data can be hacked. Evaluation I think that blockbuster does a good job of protecting the data with their strict rules. Also the data is quickly deleted to make sure nothing happens to it. Blockbuster only asks for the relevant data meaning nothing is unnecessarily taken and risked being misused. The workers only have access to a limited amount of things so that dishonest workers can't breach the data protect act and risk the law. Lots of other technology is used to help make sure the data isn't misused like CCTV cameras and firewalls. Also if the computer is left logged on then anybody can access the data. This can be stopped by a self locking system meaning that when the computer is left for a long time it locks itself and only a password can unlock it. The data protection act has a large effect on the community because it ensures that the data is not misused by anyone. The computers are only installed with the basic so the computer isn't slowed down ...read more.