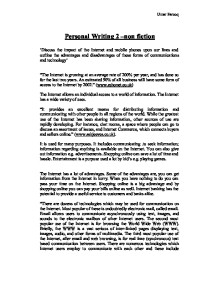 Discuss the impact of the Internet and mobile phones upon our lives and outline the advantages and disadvantages of these forms of communications and technology&amp;#146;

Personal Writing 2 -non fiction 'Discuss the impact of the Internet and mobile phones upon our lives and outline the advantages and disadvantages of these forms of communications and technology' "The Internet is growing at an average rate of 200% per year, and has done so for the last two years. An estimated 90% of all business will have some form of access to the Internet by 2002." (www.echonet.co.uk) The Internet allows an individual access to a world of information. The Internet has a wide variety of uses. "It provides an excellent means for distributing information and communicating with other people in all regions of the world. While the greatest use of the Internet has been sharing information, other sources of use are rapidly developing. For instance, chat rooms, a space where people can go to discuss an assortment of issues, and Internet Commerce, which connects buyers and sellers online." (www.askjeeves.co.uk). It is used for many purposes. It includes communicating .to seek information; information regarding anything is available on the Internet. You can also give out information e.g. advertisements. Shopping online can save a lot of time and hassle. Entertainment is a purpose used a lot by kid's e.g. playing games. ...read more.

They might get Spam or junk mail sent to them. "The Internet also houses controversial materials that many adults prefer not to have available to children for various reasons. Sites depicting pornography cause one problem."(www.princeton.co.uk). "Viruses, worms and Trojan horses are human-made software programs created specifically to wreak havoc on personal computers and networks. The chance of downloading one of these computer viruses over the Internet has increased dramatically recently. Typically, you contract a virus by opening e-mail attachments." (www.askjeeves.co.uk). Some people go round hacking computers, which is a disadvantage. The word hacking means when some hackers break into your computer and get your personal information e.g. your password or pin. Credit card and Internet fraud is another big disadvantage. "Consumers lost over $3.2 million to Internet fraud last year in incident reports to the National Consumers League's Internet Fraud Watch. A 38 percent increase in Internet fraud complaints in 1999 coupled with an average consumer loss of as much as $580 indicate an urgent need for consumer education about shopping online." (www.fraud.org). The term "Internet fraud" refers generally to any type of fraud scheme that uses one or more components of the Internet - such as chat rooms, e-mail, message boards, ...read more.

The disadvantages are that they are slow and can be expensive (as airtime is billed per minute). The actual phone itself is fairly costly as well. Another big disadvantage is that a lot of mobile phones now have radiation. This can cause brain tumour and is very dangerous. "Mobile phone users may be placing their health at risk from electromagnetic radiation. Now there is more evidence of definite effects of mobile phone radiation on human health. There are symptoms such as fatigue, headaches, burning sensations on the skin are more common among those who make longer mobile phone calls. At the same time there are a growing number of unconfirmed reports of individuals whose health has been affected after chronic, frequent use of mobile phones, presumable from radiation effects on cells.(www.globalchange.com)" Mobile phones can be time wasting by playing games the listening to tones. Mobile phones can be distracting for when you are in a quite place and your phone starts ringing. There is a risk of theft against mobile phones because they are expensive. The Internet and mobile phones have had a lot of impact upon our lives and will do as technology increases. ?? ?? ?? ?? Umar Farooq ...read more.