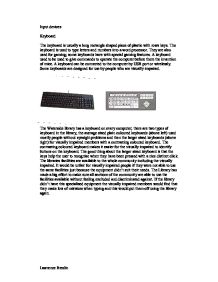 Input devices Keyboard The keyboard is usually a long rectangle shaped piece of plastic with rows keys. The keyboard is used to type letters and numbers into a word processor. They are also used for gaming; some keyboards have with special gaming features. A keyboard used to be used to give commands to operate the computer before there the invention of mice. A keyboard can be connected to the computer by USB port or wirelessly. Some keyboards are designed for use by people who are visually impaired. The Waterside library has a keyboard on every computer; there are two types of keyboard in the library, the average sized plain coloured keyboards (above left) used mostly people without eyesight problems and then the larger sized keyboards (above right) for visually impaired members with a contrasting coloured keyboard. The contrasting coloured keyboard makes it easier for the visually impaired to identify buttons on the keyboard. The good thing about the larger sized keyboard is that the keys help the user to recognise when they have been pressed with a nice distinct click. The libraries facilities are available to the whole community including the visually impaired. It would be unfair for visually impaired people if they were not able to use the same facilities just because the equipment didn't suit their needs. The Library has made a big effort to make sure all sections of the community are able to use the facilities available without feeling excluded and discriminated against. If the library didn't have this specialised equipment the visually impaired members would find that they make lots of mistakes when typing and this would put them off using the library again. Mouse There are two types of mouse, they are optical or roller ball. Mice can be wired or wireless. A mouse is an object that the user holds under one of the user's hands. ...read more.

forgotten to bring it with them they can borrow the external optical drive and buy a compact disk from the issue desk and save on to that. This means that members are still able to save there documents even if they don't own another storage device or haven't brought it with them. Members can request the external optical drive and use it to play music, CD's or DVD's. Memory pens Flash memory data storage device are also known Flash Drives, Memory Sticks, Pen Drives, and Memory Pens. Memory pens are more effective at transferring data than floppy disks or burning CD's. Storage capacities can range. The USB is usually protected by a removable cap. There is no external power required. Memory pens easily taken to any library and plugged in to the USB port, the documents can be opened at any computer they are plugged on to. Members of the library can use memory pens to save data on as they are unable to save on to the libraries computers hard drives. The library computers have two USB ports at the front of the computers to make it easy for the members to connect their memory pens. Random access memory RAM is the most common computer memory, it is used by programs to perform tasks while the computer is on. The data which is in the RAM will be lost when the computer power is switched off so it is important to save before switching off. Random access memory can improve performance, the more RAM in a computer the faster it will perform. There are several different types of RAM available for computers; these vary in cost and speed. The amount of RAM on the computers in the library is 512Mbyte memory . The library didn't need to buy extra RAM for their computers as the amount all ready on them was sufficient for general use and more than adequate for use in libraries where people use the computers for basic tasks such as word processing, surfing the internet and checking emails. ...read more.

Serial Port The serial port has been used on computers for years. Many of the newer systems have done away with the serial port completely in favour of USB connections; most modems still use the serial port, as do some printers and digital cameras. Few computers have more than two serial ports. Computer mice and even keyboards were used on serial ports. In the library USB ports have taken the place of Serial ports. All thought the computers in the library still have Serial ports they are considered to be older technology and are rarely used or needed in the library. They do however come as a standard part of the Dell computer which the library has purchased. Parallel port The parallel port is still commonly used for printers however USB is becoming more popular. A PC sends data to a printer or other device using a parallel port. The standard parallel port is capable of sending 50 to 100 kilobytes of data per second. Parallel ports are not used on the library computers as most devices are now connected using the faster USB connection. These ports come as standard on the computers which the library has bought. Ethernet port An Ethernet port is used to connect a computer to a network. In the library all computers are connected to the network using a CAT5-e cable with a RJ-45 connector. These are at the back of the computer and the members are not allowed to remove them. Fibre optic cable Fibre optic cables are made from two types of glass. Fibre optic cables are thinker than a human hair and are very flexible. These cables carry information using pulses of light. Fiber optic cables are very fast. The library uses optic fibres to connect their servers to the internet, the speed is very fast and there is no interference. Fibre optic cables are very expensive, but they give an excellent internet connection which in fast and reliable. ?? ?? ?? ?? Lawrence Breslin ...read more.