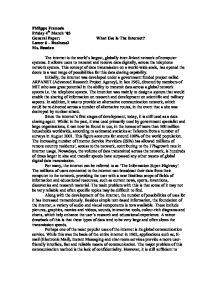 General Paper: What Use Is The Internet?

Philippe Francois Friday 4th March '03 General Paper: What Use Is The Internet? Lower 6 - Business2 Ms. Boodan The internet is the world's largest, globally inter-linked network of computer systems. It allows users to transmit and receive data digitally, across the telephone network system. This concept of data transmission on a world-wide scale, has opened the doors to a vast range of possibilities for this data sharing capability. Initially, the internet was developed under a government funded project called ARPANET (Advanced Research Project Agency), in late 1962, directed by members of MIT who saw great potential in the ability to transmit data across a global network system i.e. the telephone system. The intention was mainly to design a system that would enable the sharing of information on research and development on scientific and military aspects. In addition, it was to provide an alternative communication network, which could be re-directed across a number of alternative routes, in the event that a site was destroyed by nuclear attack. ...read more.

The main problem with this is that some of it may not be very reliable and often specific topics may be difficult to find. Along with the development of the internet, the number of possibilities of uses for it has increased tremendously. Besides simple text-based information, the foundation of the internet, a variety of audio and visual components is now available. These include pictures, graphics, movies and videos, sounds, interactive tools, colour-rich diagrams and charts, which help enhance the user's research and educational experience. A minor drawback of this is that these types of data tend to be very large and often slows the transmission speeds. Perhaps one of the most popular uses of the internet is its global communication service. While this was the basis of the entire internet in 1962, applications such as, E-mail (Electronic Mail), Instant Messaging and chat-room services provide a more user-friendly interface, fast and reliable means of communication. ...read more.

A survey done by British Telecom, estimated over $1 trillion dollars (US) in online business transactions in the year 2002. People can now trade stocks on the New York Stock Exchange via online financial brokers. Online advertising is a business in itself as well. Many organizations will offer to pay popular sites to advertise their products on their web-site. A major concern of this aspect however, is that many people are reluctant to submit personal information. In fact, there is now much more misuse of information due to these online shopping sites. Customer's credit card numbers have reportedly been stolen and used without authorization. It is a very risky process and confidentiality in never always certain. The internet can be seen as a remarkable development. However, just like all of man's creations, it is not perfect and has many serious drawbacks and disadvantages. Since its early stages of development, where uses of this data sharing capability was limited, as more people turn to the internet for its many uses, it is difficult to see what the future uses may be like. ...read more.

In summary, the report is OK. The report states how the internet was set-up and how the internet is being used today. However some of the sections are lacking detail or missing sentences. The report states that one figure accounts for 100% of the world's population, however I believe that this is false. It wouldn't be possible to have any research, which accounts for 100% of the world's population, as small babies wouldn't be able to talk and there is too many people within the world. This should be corrected within the report.

The report states that there has been an 17% increase in internet usage in remote area's, although this hasn't been justified. The report could include 'Due to additional competition within the market a number of companies have attracted consumer's by expanding their network, and advertising that all locations will have good internet access. Thus, this allows the company to acquire additional market share'. The report states that some computer files downloaded from the internet may be harmful. Although from reading the report, I'm quite confused, as it doesn't make any sense. The student is missing a few sentences regrading potential virus within files. The report could include 'When a user downloads a file off the internet, there may be a virus within the file, and this may harm a users computer by either deleting documents, copying documents, using data or other harmful aspects.

The report states the term 'E-Mail', however hasn't explained this term. An E-mail is the process of sending an electronic message to another internet user using an e-mail address, such as test@testing6. co.uk. All technical terms should be explained within the report, to allow the examiner to understand the report with ease.