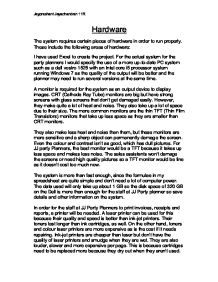 Hardware and Software -IT

Hardware The system requires certain pieces of hardware in order to run properly. These include the following areas of hardware: I have used Excel to create the project. For the actual system for the party planners I would specify the use of a more up-to-date PC system such as a dell vostro 1525 with an Intel core i5 processor system running Windows 7 as the quality of the output will be better and the planner may need to run several versions at the same time. A monitor is required for the system as an output device to display images. CRT (Cathode Ray Tube) monitors are big but have strong screens with glass screens that don't get damaged easily. However, they make quite a lot of heat and noise. They also take up a lot of space due to their size. The more common monitors are the thin TFT (Thin Film Transistors) monitors that take up less space as they are smaller than CRT monitors. They also make less heat and noise than them, but these monitors are more sensitive and a sharp object can permanently damage the screen. Even the colour and contrast isn't as good, which has dull pictures. ...read more.

Data can also be stored in a USB memory stick or external hard drive which are more portable and hold more data than CDs and floppy disks. However, these devices themselves can get lost as well as their data and the bit that is put into the USB port can be cut off if it isn't cared for properly. Due to more memory and the fact that the data stays in the computer for business use, I would say that an internal hard drive would be better to use. The final area is the input devices. A mouse and keyboard are compulsory for this system because all computers have to input data using them. Keyboards come with most computers now and are an easy way of entering data, but you can make mistakes when doing this and some things you can't do with a keyboard. Despite these, a keyboard, any keyboard, would be essential. A mouse is also needed to do things that a keyboard can't, such as control the screen by moving and pointing the mouse. Mice work well with keyboards and are easy to use, as well. They only work on flat surfaces and ball mice can get stuck, though. ...read more.

Inserting or Deleting Rows and Columns: MS Excel provides the facility to insert rows or columns into the existing worksheet. Inserting a row of data shifts the rest of the rows down and removes the last row of the worksheet. Similarly, inserting a column shifts the rest of the columns to the right and deletes the rightmost column. This occurs because the total number of rows and columns remain the same in any case. Functions and formulas: The built-in formulas are called functions. MS Excel provides analyzing data and manipulating text by using different functions. Users can easily calculate percentage, interest, average, etc. by using built-in functions. Auto-calculation: MS Excel spreadsheet allows a user to automatically recalculate the whole worksheet every time a change is made in a single cell. Charts: One of the most important features of MS Excel is a chart. MS Excel allows users to view data entered as tables in a graphical form as charts, which helps a user to easily understand, analyze, and compare data. Therefore after analysing the two software's Microsoft Office Excel 2010 and Lotus 123, I definitely think Microsoft Excel 2010 will be more useful for the staff at JJ Party Planner and the customers, since it has many different useful features that will help the staff and customers to make the system and the business successful. ?? ?? ?? ?? Jayprashant Jeyachandran 11R ...read more.

A good piece of work to identify the best hardware and software needed for your chosen company. You have shown the requirements for their system and then proceeded to show a few examples of suitable software that will fulfil the ...

A good piece of work to identify the best hardware and software needed for your chosen company. You have shown the requirements for their system and then proceeded to show a few examples of suitable software that will fulfil the task. You could go into a little bit more detail on a few points, such as the opening paragraph, when you say Ã¢â‚¬Å“quality of the output will be better.Ã¢â‚¬Â How and why would the output be better?

You have used technical terms correctly and appropriately. You have shown the need to have certain hardware and detailed its use in the system you are describing for the company. You have shown the advantages and disadvantages of your chosen components and an alternative, and then weighed up each part and chosen the most appropriate component and software for the job.

The spelling and grammar is close to perfect throughout; the only problems are a few misplaced apostrophes and suchlike, but these are minor issues and communication is of an overall high standard. You clearly show and explain your points without the piece being hard or awkward to read.