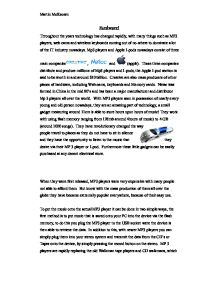 Hardware! Throughout the years technology has changed rapidly, with many things such as MP3 players, web cams and wireless keyboards coming out of no-where to dominate a lot of the IT industry nowadays. Mp3 players and Apple I-pods nowadays consist of three main companies, and (apple). These three companies distribute and produce millions of Mp3 players and I-pods, the Apple I-pod section is said to be worth in and around $10 billion. Creative are also mass producers of other pieces of hardware, including Web cams, keyboards and Memory cards. Netac was formed in China in the mid 80's and has been a major manufacturer and distributor Mp 3 players all over the world. With MP3 players seen in possession of nearly every young and old person nowadays, they are an amazing part of technology, a small gadget measuring around 11cm is able to store hours upon hours of music! They work with using flash memory ranging from 128mb around 4hours of music) to 4 GB (around 1000 songs). They have revolutionary changed the way people travel to places as they do not have to sit in silence and they have the opportunity to listen to the music that they desire via their MP 3 player or I-pod. Furthermore these little gadgets can be easily purchased at any decent electrical store. When they were first released, MP3 players were very expensive with many people not able to afford them. ...read more.

It is necessary to put songs onto your MP3 player which have been downloaded with he appropriate license required or just take them of your CD's which you have at home. MP 3 players can also act as mass storage device, in which you are able to store data off your computer (eg. Word documents, spreadsheets etc.) and move them to other computers, so in fact an MP 3 player also acts as a USB pen drive. Now focusing on the amazing part of technology, that is the Web-Camera. Invented and developed hand in hand with the Internet, these wonders have many excellent and efficient uses, for example if you are away for a weekend and if you to keep an eye on things at home, or you could even see what your friend from Australia actually looks like! With using such Internet chatting services as or. With the use of a web-cam you are able to see the person you are talking too, providing they give you permission and they actually have web-cam. Almost all of the cams on the market seem to have very similar specifications. They usually claim to have about the same resolution - most say 640x480. What you will find out is that there is a huge difference in image quality between various web cams. All modern computers are installed with USB ports which most all modern devices work off, such devices as MP 3 players, I-pods, Web cameras and wireless keyboards all run off the standard USB connection port found on the front or back of your PC. ...read more.

Additional features include 15 hot keys, USB-based receiver, and eight channels and 65,000 unique addresses for increased security. In my own opinion I think that wireless keyboards are an excellent acquisition if you are purchasing a brand new PC without a standard keyboard, but if you already own a standard keyboard with wires it may be a waste of money, as they will operate the same way. In addition to this it depends if the person buying the wireless keyboard is looking for a clutter-free environment in their home or office. Using wireless keyboards in an educational environment would not be that beneficial as a lot of the work done at a computer is first hand and you do not really require the wireless technology whilst in an educational environment. Furthermore in a school environment, it would not be appropriate for wireless keyboards to be available to students or staff for a security reason as it would be very easy for people to steal the keyboards. The three pieces of hardware I have chosen have been big factors in the revolutionary change in the I.T. industry in past few years. They can be found in huge percentage of households throughout the globe and with the way things are going now technology will continue to change rapidly. Each of these three pieces of hardware will continue to develop rapidly and we could be seeing even more wonderful inventions within the next few years at affordable prices, and very easy to find on our usual high street outlets. . ?? ?? ?? ?? Martin McKeown ...read more.