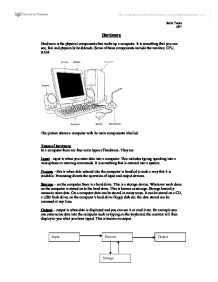 Hardware Hardware is the physical components that make up a computer. It is something that you can see, feel and physically hold/touch. Some of these components include the monitor, CPU, RAM The picture shows a computer with its main components labelled. Types of hardware In a computer there are four main types of hardware. They are: Input - input is when you enter data into a computer. This includes typing, speaking into a microphone or entering commands. It is something that is entered into a system. Process - this is when data entered into the computer is handled in such a way that it is readable. Processing directs the operation of input and output devices. Storage - on the computer there is a hard drive. This is a storage device. Whatever work done on the computer is stored on to the hard drive. This is known as storage. Storage basically means to store data. On a computer data can be stored in many ways. It can be stored on a CD, a USB flash drive; on the computer's hard drive floppy disk etc. the data stored can be accessed at any time. Output - output is when data is displayed and you can see it or read it etc. for example you can enter some data into the computer such as typing on the keyboard, the monitor will then display to you what you have typed. This is known as output. The following list states what input, process, storage and output hardware I used. Input Microsoft digital media QWERTY keyboard. Microsoft optical wheel mouse Process 2.93GHz Intel Core Duo Processor Storage 120GB SATA Hardrive 2GB RAM 4GB HP C485W USB Flash Drive. Output Daewoo international TFT monitor Samsung ML2855ND laser Printer The following table states the price, the advantages and disadvantages and how the hardware I used works. Name of device Price The way it works Advantages Disadvantages Samsung ML2855ND laser Printer �162.03 A laser printer uses laser light beams to print work, pictures etc. ...read more.

The two paragraphs below explain the two main types of software, they are: Operating Software (O.S) Operating software forms the basis of additional programs and creates an interface between the software and the computer. Operating software basically runs your computer. It is the most inpo5rtant piece of software in your computer. Operating software is software that consists of data and programs that run on a computer. It manages computer hardware and provides common services for the execution for various types of application software. Application Software Application software is software designed to help the user perform single or multiple related specific tasks. Some examples of these are word processors, spread sheets, database applications and media players. The two points below explain the two main types of operating software, they are: 1. CLI - this is short for command line interface. 2. GUI - this is short for graphical user interface. Type of O.S The Main Functions Advantages Disadvantages CLI CLI stands for command line interface. It doesn't rely on a mouse but a keyboard. This is because when using a CLI you type in certain and specific commands to perform specific tasks. A command line interface has no pictures or icons. To run this interface the computer requires less memory. You have to type in commands very precisely, if it wrong the command will fail. And you will have to enter the command again. To use this interface the computer does not require any software such as windows seven, windows vista etc. for it to run For a beginner it will be very difficult to use because they do not know the specific commands that need to be entered. It can be fast to use if you know the certain commands that you need to enter to perform the certain tasks. The commands itself are hard to remember and some can be quite lengthy. GUI GUI stands for graphical user interface. ...read more.

They are mixed together to create other colours. This improves picture quality. Fewer glares are produced from the monitor, reducing the risk of eye strain. The screen can become damaged quickly and easily. Mainly used in offices and homes. The display is better than is better qualities than CRT monitors. They can be expensive depending on how big a screen you want. Takes up less space. Sometimes the monitor can form dead pixels. This is pixels that remain one colour or stay black. CRT A CRT monitor contains millions of tiny red, green and blue phosphor dots that glow when struck by an electron beam that travels across the screen to create a visible image. They are capable of displaying detailed and vibrant colours. It uses a lot of power. More than a TFT monitor. They are mainly used in homes. They also have high resolution. If it needs to be repaired it will be difficult due to its complex design. They are more affordable and cheaper than TFT monitors. It is big and takes up a lot of space on the desk. In my task I have used the best possible output devices. It affected my work by improving the picture quality. It also made it look more professional. I have used devices such as an TFT monitor and laser printer. Conclusion The system I use for this task I think is the right one. This is because it contains all the hardware that is needed. I think that it is good and has the requirements that Satia Tours will need. Also the system is easy to use. I didn't need any extra hardware for this task, everything I needed was there. Choosing and Describing Applications =3 Describing using Hardware =3 Describing using Software = 3 Characteristics, Benefits, and drawback of each system = 6 Demonstrate use of Input Methods = 1 Comment on their speed, accuracy and validation = 4 Describe your system outputs = 1 Comparing Output devices Alternative outputs and drawbacks to your system= 4 ?? ?? ?? ?? Satia Tours AO1 1/27 ...read more.