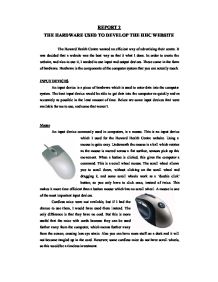 REPORT 2 THE HARDWARE USED TO DEVELOP THE HHC WEBSITE The Howard Health Centre wanted an efficient way of advertising their centre. It was decided that a website was the best way so that it what I done. In order to create the website, and also to use it, I needed to use input and output devices. These come in the form of hardware. Hardware is the components of the computer system that you can actually touch. INPUT DEVICES An input device is a piece of hardware which is used to enter data into the computer system. The best input device would be able to get data into the computer as quickly and as accurately as possible in the least amount of time. Below are some input devices that were available for me to use, and some that weren't. Mouse An input device commonly used in computers, is a mouse. This is an input device which I used for the Howard Health Centre website. Using a mouse is quite easy. Underneath the mouse is a ball which rotates as the mouse is moved across a flat surface, sensors pick up this movement. When a button is clicked, this gives the computer a command. This is a scroll wheel mouse. The scroll wheel allows you to scroll down, without clicking on the scroll wheel and dragging it, and some scroll wheels work as a 'double click' button, so you only have to click once, instead of twice. ...read more.

The can be used to record sound so it can be stored digitally. These are useful because instead of typing, you can just dictate what you want written and can play it back also. However, this takes up a lot of memory. OUTPUT DEVICES An output device is a piece of hardware used to show the result of data carried out by the CPU. The result can be shown in many ways. Below are so different output devices. Visual Display Units (VDUs) or Monitors A VDU or monitor is the most commonly used output device. They are used when results want to be viewed, but no printout is needed. There are two ways in which monitors are different from one another, size and resolution. Size is measured in inches across the diagonal of the monitor. Most monitors are about 17 inches, but laptops are usually smaller. Resolution is measured by the number of pixels that make up the image on the screen. There are different sizes, the main ones are high (1024x768), medium (800x600) and low (640x480). There are two main types of monitor, Cathode Ray Tubes and LCDs. Cathode Ray Tubes are the same screens that are used in televisions. When touched, they do not affect the appearance of the screen (unlike LCDS where the colour changes and the picture is affected on the part that is touched), however, if used for long periods of time, they can be damaging on the eyes. LCDs, or Liquid Crystal Display screens, are most common in laptops because they are light, and they are the screens that are used in flat screen computers because they are small. ...read more.

You can read data from and write data on to the floppy and you can move the data also. They are quite small and thin so they don't take up much space and they are quite cheap to buy. However, they are usually too small for typical file sizes so to keep a lot of files backed up you will need a lot of floppy disks and this will take up a lot of space. CD ROM CD-ROM stands for Compact Disc - read only memory. CDs are optical discs, this means that a laser beam is used to read the data off the disc. CD-R is blank optical disks that you can write data onto with a CD writer. DVDs use the same principals as CDs but they can hold a lot more data and can hold multimedia material. Memory Sticks A memory stick is a small device that can hold a lot of memory. It is similar to a floppy disk as in you can add and remove files from it, but instead of inserting it into the floppy drive, you insert it into a USB port. Memory Sticks are a good idea as they can hold large quantaties of data and are very portable as they are only about the size of a pen. I used a 1Gb Memory Stick to store my work for this project on. I decided to use this instead of a floppy as it can hold a lot more information and it is smaller and easier to carry around. I also kept my work backed up on my computer at home, just in case I lost my memory stick. ?? ?? ?? ?? ...read more.