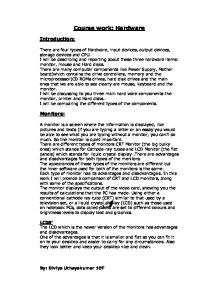 I will be describing and reporting about these three hardware items: monitor, mouse and Hard disks. it

Course work: Hardware Introduction: There are four types of Hardware, input devices, output devices, storage devices and CPU. I will be describing and reporting about these three hardware items: monitor, mouse and Hard disks. There are many computer components like Power Supply, Mother board(which contains the drive controllers, memory and the microprocessor)CD ROMs drives, hard disk drives and the main ones that we are able to see clearly are mouse, keyboard and the monitor. I will be discussing to you three main hard ware components-the monitor, printer and Hard disks. I will be comparing the different types of the components. Monitors: A monitor is a screen where the information is displayed, like pictures and texts (if you are typing a letter or an essay you would be able to see what you are typing without a monitor, you can't do much. So the monitor is quiet important. There are different types of monitors CRT Monitor (the big bulky ones) which stands for Cathode-ray tubes and LCD Monitor (the flat panels) which stands for liquid crystal display .There are advantages and disadvantages for both types of the monitors. The appearances of those types of the monitors are different but the inner software used for both of the monitors is the same. Each type of monitor has its advantages and disadvantages. In this work I will provide a comparison of CRT and LCD monitors, along with some of the specifications. The monitor displays the output of the video card, showing you the results of calculations that the PC has made. Using either a conventional cathode ray tube (CRT) similar to that used by a television set, or a liquid crystal display (LCD) such as those used on notebook PCs, dots called pixels are set to different colours and brightness levels to display text and graphics. LCDS' The LCD which is the newer version of the monitors has advantages and disadvantages. ...read more.

Most of this printing action takes place in the nozzles of the print cartridge. What happens is a interface circuit in the cartridge applies a charge. This is applied to a series of what is called impulse drivers that correspond to the selected colours. Now there are two ways to get the ink out of that cartridge. This is done with by charging and heating up a small amount of ink till it is a vapour ball and gets pushed onto the page. The other method is to apply a charge to a piezoelectric driver that is made up of synthetic quartz. The quartz expands and then pushes the ink onto the paper. This is similar to fuel injector in a sense. The laser printers are neat printers. These are used mostly in business applications and are not cheap. First off laser printers use a fine black toner. The toner itself is made up off magnetic iron compounds, plastics, and pigment that will allow it to be melted, shaped and applied to a page. The printer normally connects to some interface or port on the motherboard. These are the basic compounds. The OPC (optical photo conducting) drum. The drum is what is used to transfer this fine black toner to the page. The drum has to be charged first which by the way sucks the electricity out of your office, after the drum is charged it causes static electricity and repels the toner. Now with the drum charged the have a laser comes in and the beam strafes the drum at about 300 pulses a minute (300dpi). Each time the laser strobes this represents a single microscopic dot. The laser also breaks down the charge on the drum allowing toner to stay to the surface of the page. The drum turns allowing this process to keep repeating for every line you are trying to print. ...read more.

Mechanical Mouse: The movement of the mouse is questioned by light barries. The inner of the mechanical mouse is a movable control ball, that follows the movements of the mouse. The part-movement is felt over two striking surface in the horizontal axis and the vertical axis. The disks possess light and darkness sectors. With the help of two phototransistors per disk, it is possible to determine the revolution direction of the ball. Mostly, a small controller is used. It gets a piece of information from four signals how fast and into which direction the mouse will move. The chip is also responsible for the serial transfer of the data. Let's leave that there and let's take another example. The Mouse is efficient because without it would take a long time to figure out how to use the Keyboard as a Control device. The Mouse would be about � 5-20, it depends what kind of Mouse you buy. Connectors: * USB (Universal Serial Bus) port Standard The Standard USB plugs are used on computers and standard devices like printers, scanners, storage devices... These support both USB 1.x and USB 2.0 Mini The Mini USB plugs are designed for mobile and other small devices and appliances. These are part of the USB 2.0 specifications and do not exists for USB 1.x devices. The inner plastic part of the connector is color coded for easier identification (white part on schematics). Conclusion: I learned through looking at a lot of information that the efficient has a lot to do with the price because if a flat screen will be bought it is newer and has got lots of different extra things in it which mean it's much expensive. I also understood how a printer works technically and how I have to use it. I realised that there are many types of mice and each of them have something special on them and different advantages and also disadvantages on them. By: Diviya Uthayakumar 10T ...read more.