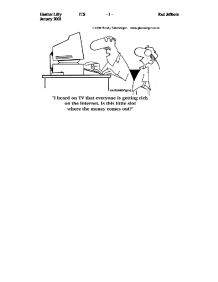 ICTs hold out the promise of, amongst other things, either: wealth, freedom and liberation from drudgery, or, social and economic control and oppression on a massive scale. Discuss these possibilities with particular reference to the Internet.

ICTs hold out the promise of, amongst other things, either: wealth, freedom and liberation from drudgery, or, social and economic control and oppression on a massive scale. Discuss these possibilities with particular reference to the Internet. The emergence of the Internet has been acclaimed to alter every aspect of our lives, but as Loader asks, it is likely to lead to a greater equalisation of power or will it just widen the digital divide further? (Loader, 1998) The only users of the early Internet were computer experts, engineers, and scientists; there was nothing friendly about it. There were no home or office personal computers at that time, and anyone who used it, whether a computer professional, an engineer or scientist, had to learn to use a very complex system with complicated commands. However, with the advent of the graphical browser and more affordable desktop computers in the early 1990s, it soon became clear to both commercial and government organisations that this was a medium that had the potential to become one of the biggest technological developments of our time. The mid to late 1990s saw share prices of dot.com companies "shoot through the roof" and the media reported each development of the new technology with increasing hype. If you weren't on the information superhighway, then you were definitely off it and likely to be left far behind. The sky-high valuations of many dot.coms stocks reflected the belief that Internet companies could revolutionise ways of doing business. If the company built a website, the customers would come with little need for further intervention. The falling stock prices now reflect the recognition that the net is not a passport to success. Dot.coms are just like any business and need customers and cash flow to stay afloat. The initiative is now swinging back to the traditional, already established companies who are only now establishing a web presence. ...read more.

Traditionally we have been restricted to the social networks in which we are physically located such as the family and the local community (Slevin, 2000). The new communications technologies permit us to go beyond these limitations of space and therefore adapt our social networks in a similar way to the way we choose our leisure activities. We are now able to choose the people we want to chat to and socialise with, be it in the same town or halfway across the world. However, Calcutt raises the issue that because in cyberspace it's now possible to shut someone off with the click of a mouse and go elsewhere, one now doesn't need to feel responsibility or worry about other people. (Calcutt, 1999). The Internet, he goes on to suggest, allows its dominant users, the middle classes, to keep in touch with carefully screened people of similar groups, making the community and alienation at once mutually dependent. (Calcutt, 1999). "The Internet is unlike anything we have seen before. It's a socially connecting device that's socially isolating at the same time" (Greenfield, 2000). It is a paradox of the internet that it can be both socially excluding, yet at the same time can form a basis of social inclusion for people who have previously been isolated. It may provide a medium for the elderly whom for reasons of mobility and perhaps expense might find it difficult to maintain social contacts or develop new social relationships. Evidence from Age Concern in the UK (www.ageconcern.org.uk) suggests that the elderly are increasingly getting on-line and are not necessarily being left behind by this technology, quoting 1 in 5 elderly people connected in the UK. They have the time to learn the skill and log on regularly, and can generally afford to use it. For users with physical disabilities the Internet whilst being physically available may remain physically inaccessible. In everyday life, problems of legibility for visually impaired readers led to the design of large-print texts and audio books. ...read more.

In conclusion, it can be seen that the Internet is still in its infancy as regards its development. The developments that unfold each day can be both exciting and disorienting, affording both opportunity and risk. The Internet is making life more convenient and enjoyable, and for some healthier, wealthier and wiser. It is also affecting work, family, and the economy in ways that were never considered at its origin, introducing new forms of tension and distraction, and posing new threats to the structure of our physical communities. Neil Postman writes that technological change is always a Faustian bargain, being both beneficial at the same time as being detrimental (Postman in Ermann 1997). To the large-scale organisations such as banks and airlines, the Internet is now indispensable. To the individual however, Postman suggests, although they can now shop at home, bank at home and get all the information they wish from home, they have had their personal data made more accessible by powerful institutions, have become easily tracked and made easy targets for advertising agencies with never-ending junk mail. There is no doubt that for those fortunate to have access to the Internet, the world has now become a much smaller place. We can foresee mixed blessings from today's emerging technologies, and perhaps should be alert for unexpected consequences that must be addressed by thoughtful design and appropriate use. Perhaps instead of being either a technophile or a technophobe, we should try to develop the middle ground between techno-utopianism and neo-Luddism. "the web is information at your fingertips, but its also information overload....it's spending an hour getting information that you could have gotten on the phone in no time at all. The web has proven invaluable when seeking medical information but it's also meant yet more junk mail, cyberscams and porn...... it's busy signals and servers down and aggravations of pages that take too long to download. We as a society were already feeling overworked when along came the web, yet another breakthrough that makes life feel more like a perpetual run on a treadmill. ...read more.