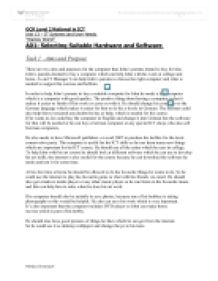 OCR Level 2 National in ICT Unit 13 - IT Systems and User Needs "Waines World" A01: Selecting Suitable Hardware and Software Task 1 -Aims and Purpose These are my aims and purposes for the computer that John's parents intend to buy for him. John's parents decided to buy a computer which can help John with his work at college and home. As an IT Manager I can help John's parents to choose the right computer and what is needed to support his courses and hobbies. In order to help John's parents to buy a suitable computer for John he needs a dell computer which is a computer with good quality. The positive thing about having a computer is that it makes it easier to finish off his work or carry on with it. He should change his computer to the German language which makes it easier for him to do his a-levels in German. The internet could also help him to research any doubts he has or help, which is needed for his course. If he wants to, he could buy the computer in English and change it into German but the software for that will be needed or he can buy a German computer at any special ICT shops who also sell German computers. He also needs to have Microsoft publisher- or word 2007 to produce his leaflets for the local conservative party. ...read more.

Helps John to communicate with his friends at his free time. Microsoft Office multi language pack Translates the language of Microsoft office and makes it translate any language which is your choice. This helps John to improve his German skills and learning which makes it easier for him to do his German A level. Windows Vista It's a line of operating systems developed by Microsoft for use on personal computers, including home and business desktops, laptops, Tablet PCs, and media centre PCs. This makes it able for John to use his personal computer including the things he likes. Adobe Dreamweaver Adobe Dreamweaver is a web development application, originally created by Allaire Systems. John is able to create and design his own web site or websites for his coursework. A02: Specify a Computer System Task 1 -Finding Prices The following are quotes for the hardware and software which were given above. These are my different sources where I got my quotes from: http://shopping.kelkoo.co.uk/ 34 Task 2 - Presenting Quotes Quote #1: Source http://shopping.kelkoo.co.uk/ Quote #2: Source http://www.pcworld.co.uk/ Item Item Details Item Price Item Details Item price USB Memory stick Sleek & durable, stylish yet robust key compliments reliability & security with its fun & funky side. 2GB Data store. * Holds over 1600 digital photos * Holds up to 500 MP3 songs or 3 movies * Pink metal casing �8.99 Mobile Internet access at broadband speeds Maximum speeds of ...read more.

` A06: Understand and Carry Out Backup Routines Backup routine name and description Good points about the backup routine Bad points about the backup routine Reasons why you would use / not use this method. USB Stick Saves work which has been done from any software, or even music and pictures which can be continued somewhere else with the same software used. You have to use the same software which has been used for the work done, and if that software is not available you are not able to continue. I would use the USB stick because you can carry around your work where ever you want to. CD/DVD Gives us anything that has been saved on the disc. The work that is on the CD/DVD has to ne copied or downloaded from the disc to continue and it doesn't save changes that have been made. I wouldn't use it because if the CD/DVD gets scratched badly you can't use it and it depends on what you would use it and which machines can read the information. Digital camera The digital camera is kind of like the USB stick, which backups anything that was saved. Changes that have been made can't be saved as easily as on the USB stick. This helps to back up work and continue the work somewhere else it is quite similar to the USB stick. USB Backup CD Backup ?? ?? ?? ?? 1 | Page ICT Unit 13 Nieluja Sivarajah ...read more.

*** A good introduction to specifying and setting up a computer, but it could be better organised and it not always clear