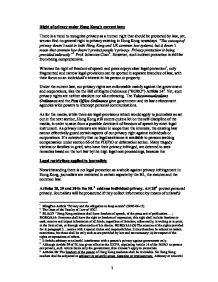 Right of privacy under Hong Kong's current laws There is a trend to recognize privacy as a human right that should be protected by law, yet, we can find no general right to privacy existing in Hong Kong nowadays. "The concept of privacy doesn't exist in both Hong Kong and UK common law systems, but it doesn't mean that common law doesn't protect people's privacy. Privacy protection is being provided indirectly"1 Prof. Johannes Chan2. However, such indirect protection is still far from being comprehensive. Whereas the right of freedom of speech and press enjoys clear legal protection3, only fragmented and narrow legal provisions can be spotted in separate branches of law, with their focus on an individual's interest in his person or property. Under the current law, our privacy rights are enforceable mainly against the government and corporations, like the the Bill of Rights Ordinance ("BORO") Article 144. Yet, such privacy rights are neither absolute nor all-embracing. The Telecommunications Ordinance and the Post Office Ordinance give government and its law enforcement agencies wide powers to intercept personal communications. As for the media, while there are legal provisions which would apply to journalists as set out in the next section, Hong Kong still counts quite a lot on the self-discipline of the media, in order to save from a possible detriment of freedom of speech by strict legal instrument. As privacy interests are wider in scope than the interests, the existing law cannot effectively guard certain aspects of our privacy right against individuals or corporations. ...read more.

Possible detriments on freedom of press Two New Torts The new torts produce detriments effect on Hong Kong's freedom of press by (i) impacting small media organizations with financial costs, including legal fee and remedies, (ii) placing unnecessary psychological and legal burden on journalists' and respective media, and (iii) substantially hindering journalists' newsgathering activities. Once convicted, small newsrooms which cannot afford the damages will have to close down; journalists' careers will be ruined. These could happen when one or two mistakes committed, and these could arise only from their insufficient legal understanding. This concern was suggested by Article 45 Concern Group member Alan Leong: "It is hard to grasp the kind of legal restriction (in the proposal concerned) accurately, even for lawyers." To elude from the aforementioned tragedies, journalists will have to bear undue psychological burden in the course of their newsgathering activities. They might have to give up on some valuable stories of public interests in fear of being sued in tort. Also, tort damages can be lucrative. In the proposal, publication is not necessary for the first tort intrusion to occur. Such widening of scope of tort may provoke numerous unnecessary money-seeking legal actions against big media organizations. For public interest, active journalists or news organizations may very often need to cover news in a way that infringe the much widened restriction, it would certain frustrate them if they have to go through all the tedious judicial proceedings while they are working ethically. ...read more.

that personal data might be collected by means of a photograph; (b) that journalists can legally take photographs of unidentified persons in public area to illustrate news articles; and (c) that personal data collection means the compilation of information about an identified person by data user. 12 Undercover agent case: Case No.: ar0102-4 of the Office of the Privacy Commissioner for Personal Data (PCO): In an article, a copy of a police undercover agent's witness statement in which his Hong Kong Identity Card Number, Police UI Number and full Chinese Name was disclosed without consent. Since the display of those particulars didn't serve any public interest, the newspaper was later found to be in breach of DDP3. 13 "News activity" means any journalistic activity and includes- the gathering of news; preparation or compiling of articles or programmes concerning news; or observations on news or current affairs, for the purpose of dissemination to the public; or the dissemination to the public of any article or programme of or concerning news; or observations on news or current affairs. 14 Gigi Leung Case: the black sheep of journalists who ransacked singer Gigi Leung's hotel room could definitely be sued for trespass if such news is proved to be true. 15 Diana, Princess of Wales sought to bring a breach of confidence action against the Sunday Mirror after it published photographs of her exercising in a gym. 16 (1987) HKLR 711 17 [2003] EWHC 2629 18 Saltman Engineering Co Ltd v. Campbell Engineering Ltd, (1948) 65 P.R.C. 203 19 Church of Scientology v. Gerald Armstrong (1984) ?? ?? ?? ?? 1 ...read more.