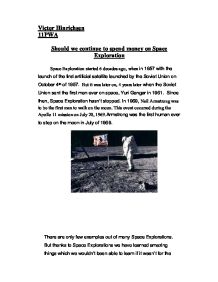 Should we continue to spend money on Space Exploration

Victor Hinrichsen 11PWA Should we continue to spend money on Space Exploration Space Exploration started 6 decades ago, when in 1957 with the launch of the first artificial satellite launched by the Soviet Union on October 4th of 1957. But it was later on, 4 years later when the Soviet Union sent the first man ever on space, Yuri Gangar in 1961. Since then, Space Exploration hasn't stopped. In 1969, Neil Armstrong was to be the first man to walk on the moon. This event occurred during the Apollo 11 mission on July 20, 1969.Armstrong was the first human ever to step on the moon in July of 1969. ...read more.

The satellite is lifted from the earth's surface by a rocket and, once placed in orbit, maintains its motion without further rocket propulsion. Now-a-days there are many satellites on Orbiting around Earth, sun, and other planets. There exist different satellites for different jobs. It has brought us other benefits like Weather satellites, which helps us predict weather. Some of today's modern technology, wouldn't exist if it wasn't for Satellites; Communication, Internet, Phones, Mobile phones, Television. Humans would have little knowledge of the Earth. People along with Scientists would think it's wrong to stop Space Exploration because of its amazing benefits. ...read more.

We wouldn't have more weather predictions, putting countries or certain regions on danger, since we could not predict a Hurricane or any Environmental Hazard. I think it would be extremely hard to live without does benefits. Some people as I mentioned before, couldn't work without communication. I think we should continue to spend money on Space Explorations; the government spends less then 1% of its budget per year on space exploration, over 30% of its budget helping poor in the U.S. We have adapted most of does benefits to our everyday living. I don't think it will ever stop, I hope it will continue to bring to us further benefits, and that they keep developing technology. ...read more.