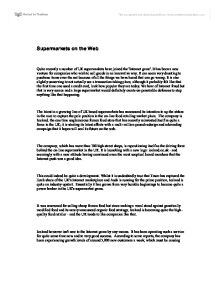 Supermarkets on the Web

Supermarkets on the Web Quite recently a number of UK supermarkets have joined the 'Internet game'. It has been a new venture for companies who wish to sell goods in an innovative way. It can seem very daunting to purchase items over the net because of all the things we have heard that can go wrong. It is also slightly unnerving to not actually see a transaction taking place, although it probably felt like that the first time one used a credit card, look how popular they are today. ...read more.

The company is Iceland, the one time unglamorous frozen food store that has recently reinvested itself as quite a force in the UK; it is starting its latest efforts with a multi-million pound redesign and rebranding campaign that it hopes will seal its future on the web. The company, which has more than 700 high street shops, is repositioning itself as the driving force behind the on-line supermarket in the UK. It is launching with a new logo: iceland.co.uk - and seemingly with a new attitude having convinced even the most sceptical board members that the Internet push was a good idea. ...read more.

It was renowned for selling cheap frozen food but since making a vocal stand against genetically modified food and its newly announced organic food strategy, Iceland is becoming quite the high-quality food retailer - and the UK tends to like companies like that. Iceland however isn't new to the Internet game by any means. It has been operating such a service for quite some time now and to very good success. According to some reports, the company has been experiencing growth levels of around 5,000 new customers a week, which must be causing Tesco to take note of this hard working supermarket. ...read more.