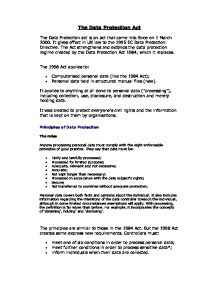 Personal data covers both facts and opinions about the individual. It also includes information regarding the intentions of the data controller towards the individual, although in some limited circumstances exemptions will apply. With processing, the definition is far wider than before. For example, it incorporates the concepts of 'obtaining', holding' and 'disclosing'. The principles are similar to those in the 1984 Act. But the 1998 Act creates some express new requirements. Controllers must: * meet one of six conditions in order to process personal data; * meet further conditions in order to process sensitive data*; * inform individuals when their data are collected. ...read more.

The supervisory authority The Data Protection Registrar became the Data Protection Commissioner. From 30 January 2001, the Commissioner became the Information Commissioner. She: * enforces the Act's requirements (with strengthened powers); * promotes compliance and good practice; * manages the notification scheme. Notification Registration under the 1984 Act is replaced with notification. * Controllers must tell the Commissioner about their processing (unless exempt). * Exemptions cover: o manual records; o core business activities; o charities' membership records. * Schools and partnerships only notify once. * There is provision for voluntary notification. Exemption from notification does not exempt from the data protection principles. Transitional Periods There are transitional exemptions: * until 24 October 2001, for certain automated and manual processing; * until 24 October 2007 (more limited) for certain manual processing. ...read more.

In summary, the report explains how the internet is subject to the Data Protection Act. However the student clearly doesn't understand the eight principles of the regulation, and this is shown though-out the report. The first opening sentence is in-correct. ...

In summary, the report explains how the internet is subject to the Data Protection Act. However the student clearly doesn't understand the eight principles of the regulation, and this is shown though-out the report. The first opening sentence is in-correct. The report states 'The Data Protection act is an act that came into force on 1 March 2000.' However further down the report this states it came into force in 1998. The correct date, is 1998, and this is the date when the regulation became law. This will need to be corrected, in order to achieve even a 'Pass', as this shows low level understanding, as this is false. The report states 'Personal data covers both facts and opinion', although data is usually only facts as the data needs to be accurate. (This is even within one of the eight principles of the law). This shows a weak understanding of the subject, and shows the examiner that the student doesn't fully understand the eight principles. The report described how the act compares to other laws within the UK, and this shows quite a good understanding of how this impacts on people within the UK.

The report states the eight different principles, however this doesn't explain how it's necessary to have each point and what type of websites these points are applied to. For example the report could include something on the lines of 'The data must be stored on secure servers, in order to protect data which if accessed and used incorrectly, this could damage the day-to-day living of consumer's.'. The above example could be used to explain the principle 'Secure'. This will show the examiner that the student has not only acknowledged the eight principles, but have gone further and explained how each one applies to websites and the implications of not enforcing these principles.

The writing in some areas is quite informal and this will need to be addressed. As there's some sections which are formal and professional and some areas aren't The report will need to have a consistent writing style throughout.