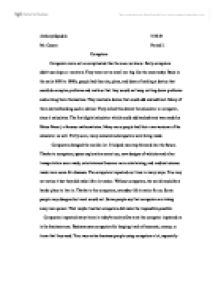 The development of computers and their uses.

Anthony Spadola 3-30-04 Mr. Cecere Period L Computers Computers were not as complicated like the ones we know. Early computers didn't use chips or monitors. They were not as small nor big like the ones today. Back in the early 1600 to 1800s, people had theories, plans, and ideas of making a device that could do complex problems and math so that they would not keep writing down problems and solving them themselves. They wanted a device that could add and subtract. Many of them started building such a device. They called this device the calculator or computer, since it calculates. The first digital calculator which could add and subtract was made by Blaise Pascal, a famous mathematician. Many more people had their own versions of the calculator as well. Pretty soon, many calculators/computers were being made. Computers changed the world a lot. ...read more.

Most of those charts were made by computers. The business field uses the computers a lot for their companies and organizations. Another area computers impacted on is the entertainment area. Most of the people out there like science fiction or action movies, especially the ones with the neat looking effects. Well, those graphics were mostly made by computers. Most of the movies today use computer graphics to make things more realistic but not real. Computer graphics are mostly used on spaceships, aliens, monsters, and special effects. Education was impacted by computers as well. Computers help out students in a lot of today's projects and essays. If a student were to do an essay on the planet Saturn, they could look in an electronic encyclopedia in the computer or they could look up their topic on the internet. They could also type their essays and reports on what's called a word processing program. ...read more.

Computer helped the medical area a lot and we are grateful for that since they keep track of our health. Other areas the computer impacted on is space exploration and designs of transportation. Using the computer for pleasure, gratification, or relief from stress. Feeling irritable and out of control or depressed when not using it. Spending increasing amounts of time and money on hardware, software, magazines, and Computer related activities. Neglecting work, school or family obligations. Lying about the amount of time spent on computer activities. Risking loss of career goals, educational objectives, and personal relationships. Failing at repeated efforts to control computer use. These are some reasons why computers drastically change the lives of people who use them. Computer dependency can affect an individual's life in more ways than one. As you can tell the positive aspects out weigh the negative aspects of the computer. I got my information from the computer how ironic. 1) negative aspects about computers 2) positive aspects about computers 3) computer history ...read more.