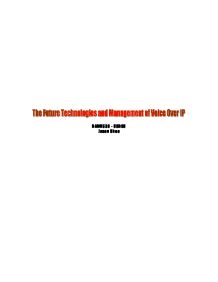 The future technologies and management of voice over IP

BADM530 - USDSU Jason Shea Abstract The big buzzword in Telecommunications for the past three years has been VoIP, or voice over Internet Protocol. This technology allows users to connect VoIP telephones to a home or business network, bypassing the original telephone connection. There are several new software companies that have introduced desktop applications that allow users to easily use their computers to conduct telephone calls. For long distance purposes, it can be cheaper to use VoIP technologies instead of the standard telephone lines. There are several pitfalls to VoIP, such as a slow connection speed, which can cause poor audio quality or dropped calls, similar to a cell phone. This presents several obstacles for management in deciding if VoIP would be cost-effective. It also presents obstacles for the technology specialists to understand the pitfalls and develop more effective technologies. Improved connection speeds and emerging advanced technologies, could lead to an increase in VoIP usage. The Future Technologies and Management of Voice Over Internet Protocol Telecommunications managers should be continually searching and monitoring the market for emerging technologies. One such technology that managers should be aware of is voice over Internet Protocol, otherwise known as VoIP. VoIP allows for the combining of voice and data applications onto a single platform, which is known as "convergence." A converged network offers businesses numerous advantages over the older, two-network voice and data system, including lower costs, simpler network management, and the ability to deploy new applications that heighten both productivity and customer service. ...read more.

Most of these lines are not encrypted; therefore, all of the lines can be monitored by hackers. Locations where hackers could potentially tap into the network should be secured. If a VoIP session is going to be initiated over the Internet, a VPN tunnel is required. IPSec and Secure Socket Layer VPN vendors are adding VoIP support to their products. It is important for telecommunications managers to run their VoIP server separate from the rest of the network. The utilization of a firewall that is VoIP "aware" is essential if there are voice-mail options. It is important to keep voice-mail completely secure since company secrets may be discussed. Redundancies across the entire system are necessary for a stable VoIP environment. These redundancies include backup power and backup circuits. Some other options available to telecommunications managers in securing their VoIP system include, network security and health monitoring technologies, access controls at connection points to data network segments, and scalability of design relative to current and projected requirements. There are several factors that a telecommunications manager must take into account when developing a well thought out security plan for VoIP. There are three main threats to VoIP security: authentication failures, integrity failures, and privacy failures. Telecommunications managers should consider all three at each layer of VoIP implementation. The application layer is the most difficult in securing. Most VoIP networks run on phones, which have limited hardening and poor security. ...read more.

(Beardsley et al.) Another factor that could influence the growth of voice over Internet Protocol is the Federal Communications Commission's regulations. Presently, they have been pressured into stepping in to make regulatory decisions concerning the governance of VoIP. This was sparked by several states exploring their ability to regulate intrastate VoIP calls. The state and federal government will be battling the industry over how or even if VoIP should be regulated. A major part of the debate comes down to monetary issues. Sates and incumbent telephone providers want a piece of the VoIP pie. Their focus centers on three primary areas, state telecommunications tax revenues, monetary contributions to the federal state universal service fund supporting rural services, and intercarrier compensation for calls traveling the public switched telephone network. The regulations that were set forth for the monopoly circuit-switch phone systems are ill-suited to be translated to the VoIP systems. But it is important to understand the regulatory backdrop to participate in the current regulatory debate of VoIP. (Blosser and Kunin) Conclusion While VoIP could be an emerging standard in communications, it is important for telecommunications managers to consistently analyze their internal environment to decide if implementing a VoIP system would be economical. As broadband becomes more readily available and increased bandwidth speeds are utilized, companies will be more willing to adopt VoIP systems without worrying about a loss in the Quality of Service. While it will be a gradual process of transferring circuit-switch phone systems to voice over Internet Protocol systems, it is a technology that telecommunications managers must be aware of and constantly analyze the benefits for their business. ...read more.