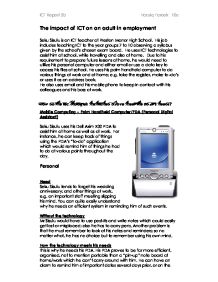 The impact of ICT on an adult in employment

The impact of ICT on an adult in employment Seku Sisulu is an ICT teacher at Preston Manor High School. His job includes teaching ICT to the year groups 7 to 10 observing a syllabus given by the school's chosen exam board. He uses ICT technologies to assist him at school, while travelling and also at home. Due to his requirement to prepare future lessons at home, he would need to utilize his personal computer and either email or use a data key to access his files at school. He uses his palm handheld computer to do various things at work and at home; e.g. take the register, make to-do's or uses it as an address book. He also uses email and his mobile phone to keep in contact with his colleagues and his boss at work. How do the technologies mentioned above meet the adult's needs? Mobile Computing - Palm Handheld Computer/PDA (Personal Digital Assistant) Seku Sisulu uses his Dell Axim X30 PDA to assist him at home as well as at work. For instance, he can keep track of things using the PDA's "to-do" application which would remind him of things he had to do at various points throughout the day. Personal Need Seku Sisulu tends to forget his wedding anniversary; and other things at work, e.g. an important staff meeting slipping his mind. You can quite easily understand why he needs an efficient system in reminding him of such events. Without the technology Mr Sisulu would have to use post-its and write notes which could easily get lost or misplaced; also he has to carry pens. Another problem is that he must remember to look at his notes and reminders; so no matter what, he has no choice but to remember using his own mind. How the technology meets his needs This is why he needs his PDA. His PDA proves to be far more efficient, organised, not to mention portable than a "pin-up" note board at home/work which he can't carry around with him. ...read more.

The high setting creates a frequent problem - as well as blocking unwanted emails, it tends to categorise wanted emails as spam too - this could mean important emails not being read in time. Social Need Seku Sisulu needs to watch the news on television and catch up with world stories and technology news; but he doesn't have time to watch it most of the time due to his work. Without the technology Mr Sisulu would have to try and find time and watch TV; but this is initial problem, he doesn't have time to sit down and watch TV or listen to the radio. Although he can listen to the radio any time, in his car or at home; he'd rather at least see pictures or video of news so that he could gain a better understanding. How the technology meets his needs To compensate for this, he catches up on technology issues and news from the BBC website. He subscribes to their daily technology newsletter via email, which summarises the daily tech news and gives him links to the main stories daily; he could catch up wherever he is, at work or at home or while on the move on his PDA since he is always using a personal computer of some sort. Personal Needs Seku's family live abroad and, due to his work and lack of expenses, he hasn't been able to see them in a long time. He needs to keep in touch with them frequently. Without the technology Using the phone to contact them is not only expensive; there is the aggravation of nobody picking up the phone sometimes. Also, since the time zones differ, he has to call his family at a specific period during the day. And usually on the phone you will forget certain things you were meant to say. How the technology meets his needs Email contradicts these problems; he uses it to send his family videos, pictures and update them on news whenever he pleases and they will still receive them regardless of what time it is. ...read more.

However, they need assistance in locating his residence, and they do not possess a Satellite Navigation system. Therefore, Seku needs to direct them himself. Without the technology Mr Sisulu would receive a great hassle over calling them over his landline as it would cost him more to call another mobile; also, if he has the same problem when trying to get to a friend's house, he must contact them somehow while on the move. To do this he must find a payphone and waste time and money pulling over and calling from there. How the technology meets his needs Mr Sisulu uses his mobile phone to give them directions. He can also use it to make sure they come on time and that they're alright. This would be better than them having to stop and check on the atlas. Using his mobile phone would be better than using his landline because it would cost less. He would also be able to call his friends when he needs directions. Personal Need Seku also has a wife and son. He would very much need to be in contact with them, just as much as they would need to be with him, especially in case of emergencies. He needs to contact his family at home when he is on his way from work, and his wife would need to let him know if she is going out somewhere; shopping, for instance. Without the technology Mr Sisulu and his family would both be oblivious to each other's daily activities; and if there is any emergency both would not be able to reach each other directly. How the technology meets his needs His mobile phone lets him do this, and he can contact his family anywhere and anytime to make sure everything is fine. Sometimes, he may feel that calling his wife when he knows she's driving isn't a good idea. On these occasions he would use SMS or MMS to send messages; MMS would be more appropriate and appealing on occasions such as anniversaries or birthdays. ?? ?? ?? ?? ICT Report 3b Haaziq Farook 10o ...read more.