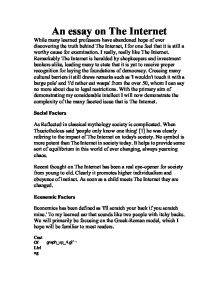 An essay on The Internet While many learned professors have abandoned hope of ever discovering the truth behind The Internet, I for one feel that it is still a worthy cause for examination. I really, really like The Internet. Remarkably The Internet is heralded by shopkeepers and investment bankers alike, leading many to state that it is yet to receive proper recognition for laying the foundations of democracy. Crossing many cultural barriers it still draws remarks such as 'I wouldn't touch it with a barge pole' and 'i'd rather eat wasps' from the over 50, whom I can say no more about due to legal restrictions. ...read more.

Recent thought on The Internet has been a real eye-opener for society from young to old. Clearly it promotes higher individualism and obeyence of instinct. As soon as a child meets The Internet they are changed. Economic Factors Economics has been defined as 'I'll scratch your back if you scratch mine.' To my learned ear that sounds like two people with itchy backs. We will primarily be focusing on the Greek-Roman model, which I hope will be familiar to most readers. Cost Of Living graph_up_4.gif � The Internet There is no longer a need to argue the importance of The Internet, it is clear to see that the results speak for themselves. ...read more.

Take a moment to consider the words of award winning journalist Elijah T. Time 'political change changes politics, but where does it go?' [2] He was first introduced to The Internet by his mother. Both spectacular failure and unequaled political accomplishment may be accredited to The Internet. While The Internet may be a giant amongst men, is it a dwarf amongst policy? I hope not. Conclusion In conclusion, The Internet plays a large part in the lives of all. It enlightens our daily lives, ensures financial stability and it brings the best out in people. I will leave you with the words of Hollywood's Clint Pfeiffer: 'I love The Internet? Yes! Hurray for The Internet!' ...read more.