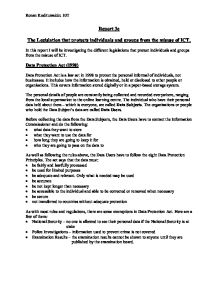 Report 3e The Legislation that protects individuals and groups from the misuse of ICT. In this report I will be investigating the different legislations that protect individuals and groups from the misuse of ICT. Data Protection Act (1998) Data Protection Act is a law set in 1998 to protect the personal informal of individuals, not businesses. It includes how the information is obtained, held or disclosed to other people or organisations. This covers information stored digitally or in a paper-based storage system. The personal details of people are constantly being collected and recorded everywhere, ranging from the local supermarket to the online learning centre. The individual who have their personal data held about them - which is everyone, are called Data Subjects. The organizations or people who hold the Data Subject's data are called Data Users. Before collecting the data from the Data Subjects, the Data Users have to contact the Information Commissioner and do the following: * what data they want to store * what they want to use the data for * how long they are going to keep it for * who they are going to pass on the data to As well as following the rules above, the Data Users have to follow the eight Data Protection Principles. The act says that the data must: * be fairly and lawfully processed * be used for limited purposes * be adequate and relevant. ...read more.

Worm A computer worm is self-replicating program that sends copies itself via network without the users' permission. Some worms are dangerous and can delete files, encrypt files, send e-mails and make backdoors to allow hackers to enter through. Trojan horse Unlike a virus, Trojan horse is a program that actually contains or installs a malicious program, while disguising itself of being something else (e.g. a program claiming to a screensaver would create a backdoor to allow remote access to the user's computer remotely when run). Most Trojan horse programs would: * Erase data * Encrypt files * Upload or download files * Spread other malware such as viruses or worms * Log keystrokes to steal information such as credit card details Antivirus software Antivirus software is a programme that attempts to identify, prevent and eliminate malware that tries to infect a computer. This does by two methods: * Scanning files to find malware that match the virus library * Identifying suspicious behaviour from any programmes which might indicate a possible infection. If a piece of code that matches any definitions in the virus library, the software can one of these following actions after informing the user: * Try to repair the file by removing the malware * Quarantine the file so the virus cannot spread * Delete the infected file In Report 3D, I talked about the impact of ICT in my local community. ...read more.

If I download pirated software from "warez" sites, and install them with the help from serial numbers available on the internet, I would be breaching the Computer Misuse Act. The result of downloading illegal copies of computer software is that many people would download the software and then distribute them. This means that the company which made the software would suffer major financial losses and they would have to increase the prices of their goods, ensuing in the people who actually buy the programme paying more. This would mean that they would rather download the software illegally than buying it. This consequence in fewer customers, so the company would have to raise the prices even more. As with the Computer Misuse Act, it is very difficult to actually catch someone who is breaking the act, but when they are caught the punishments are very harsh. Undoubtedly, everyone who uses ICT for their normal and needs have knowingly or not have broken the Copyright, Designs and Patents Act. This varies from copying and pasting some images from a website to distributing pirated content (e.g. films, software, games). To reduce the risk of breaking the act, I must purchase media contents, software and games legally - either from a retail shop, or from verified websites. If I have to copy some content from another website (e.g. history of the washing machine), I have to include some acknowledgements to the source. ?? ?? ?? ?? Ronan Kodituwakku 10T ...read more.