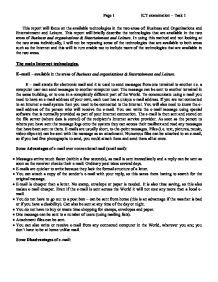 This report will focus on the available technologies in the two areas of: Business and Organizations and Entertainment and Leisure. This report will briefly describe the technologies that are available in the two areas of Business and organizations & Entertainment and Leisure. In using this method and not looking at the two areas individually, I will not be repeating some of the technologies that are available to both areas such as the Internet and this will in turn enable me to include more of the technologies that are available in the two areas. The main Internet technologies. E-mail - available in the areas of Business and organisations & Entertainment and Leisure. E - mail stands for electronic mail and it is used to send messages from one terminal to another i.e. a computer user can send messages to another computer user. The message can be sent to another terminal in the same building, or to one in a completely different part of the World. To communicate using e-mail you need to have an e-mail address of your own, each user has a unique e-mail address. If you are not connected to an Internet e-mail system then you need to be connected to the Internet. You will also need to know the e-mail address of the person who will receive the e-mail. You can write the e-mail message using special software that is normally provided as part of your Internet connection. The e-mail is then sent and stored on the file server (where data is stored) of the recipient's Internet service provider. As soon as the person to whom you have sent the message logs onto the system they can access their mailbox and read any messages that have been sent to them. E-mails are usually short, to-the-point messages. Files (i.e. text, pictures, music, video clips etc) can be sent with the message as an attachment. ...read more.

* You get instant feedback in speech. * Mobile phones also come with a text feature. * They are abundant and there is a large selection of choice/ there are also cheap mobile phones e.g. the Nokia 3200 is �29.99. * There are many tariffs and deals available/ the correct tariff can also lower the cost. Some Disadvantages of mobile phones: * Still quite expensive, even though they have been around for a while and have recently gone up after mobile companies were having profit lowered. * Expensive bills, from constant use. * Networks expenses vary and calling different networks increases price. * They are well known targets of stealing and can cause violent assaults. * Reception is not everywhere. * Mobile phone radiation may cause health risks in years to come if in constant use. Provided all employees have a mobile phone companies can be constantly in touch with all their employees. Mobile phones mean that people can communicate with each other wherever and whenever they want to. Over time mobile phones have become a lot smaller. At the same time they have also incorporated far more features such as: access the web, text messaging, taking pictures, voice messages and the latest developments include polyphonic ringtones or monophonic ringtones and video links so you can see who you are talking to. In the future all mobile phones may have video link facilities, at the time being this facility only exists on one network (network three). Some time in 2004 there will also be mobile phones available, which are simply a small device that you attach to your finger and put to your ear. These are already becoming available in Japan where they were developed. SMS - available in the areas of Business and organisations & Entertainment and Leisure. Simple message service (or SMS) is the service that is commonly used to send and receive text messages using mobile phones. ...read more.

PDAs also mean that employees now have access to a huge range of information. They have given greater freedom to some disabled people in that they are able to access information on their own (using a handheld stylus) and they are also able to carry that information around with them so that they are not so much reliant on others, giving them more independence and a chance to achieve their full potential. PDAs are the one of the fastest selling consumer devices in history. Since their release, more than 9 million personal digital assistants have been sold. They were originally designed as organizers. They could store addresses and phone numbers, keep track of appointments, and carry lists and memos. PDAs still do those things, but over time, more and more features have been incorporated into these devices and they have since become more versatile, for example they can now retrieve or send e-mail or download other information from the Internet and can play music, movies and video games. They have also become easier to use and handle and they are now used in places such as schools and disability centres. In the near future, the price of PDAs should come down slightly in order to appeal more because as it stands to many, their purpose is rather ambiguous. Also in the near future, customers may be able to watch streaming videos or to listen to sound clips as these functions may become supported and PDAs and Global Positioning System (GPS) receivers will be combined into one handheld device. Also, Some PDAs will be able to capture and store images, as a digital camera does and Hewlett-Packard is developing software that could wirelessly connect a PDA to a printer, most PDAs will also incorporate voice recognition technology, where you speak into a built-in microphone while software converts your voice waves into data. Soon enough, more consumers will become attracted to PDAs because they now have the same functionality as laptops but are much more portable and convenient and in some cases offer more features. Page 1 ICT examination - Task 1 ...read more.