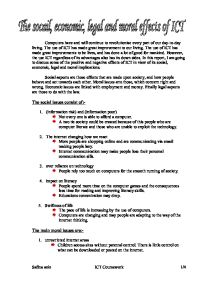 The social, legal, moral aspects of I.C.T. In this report, I am going to discuss some of the positive and negative effects of ICT in view of its social, economic, legal and moral implications.

Computers have and will continue to revolutionise every part of our day-to-day living. The use of ICT has made great improvement to our living. The use of ICT has made great improvements to be lives, and has done a lot of good for mankind. However, the use ICT regardless of its advantages also has its down sides. In this report, I am going to discuss some of the positive and negative effects of ICT in view of its social, economic, legal and moral implications. Social aspects are those effects that are made upon society, and how people behave and act towards each other. Moral issues arte those, which concern right and wrong. Economic issues are linked with employment and money. Finally legal aspects are those to do with the law. The social issues consist of:- 1. (information risk) and (information poor) * Not every one is able to afford a computer. * A two tie society could be created because of this people who are computer literate and those who are unable to exploit the technology. ...read more.

It contains 8 rules which are as follows:- * Personal data must be used for lawfully purpose * All personal data must be processed fairly and lawfully. * The data must be pertinent, significant, and less for the purpose. * Should be exact * Data must be safe in the right of the data subject matters * Data must not go out to any countries out of the European economic. If the law is not abided on then the person would be faced with a consequence such as paying a fine. * Computer misuse Act 1990 Due to the misuse of ICT such as hacking, fraud and viruses, the law was introduced in 1990 called "computer misuse act 1990", this made three things illegal which are as followed: * Illegal hacking, this includes things that you are not allowed to look legally. The started that if this rule was broken then the person would get a fine of �2000 and a six month imprisonment. * If someone gained computer materials illegally, then the consequence for breaking this rule is that the person gets an unlimited fine and imprisonment, the maximum years for imprisonment is up to five years. ...read more.

The government faces unemployment because of machines, which have taken over thought computerised systems. However, the government helps people find jobs. The internet is an open door to trading EBay is one of the fastest growing ways of selling at home. The social economic issues in regards to using ICT in interactive travel agencies:- * Social aspects: * People may fear that there personal information would be hacked into. * People might become too reliable on using the travel agency on the net, which it may result in them losing their confidence of actually asking directly about flight in the travel agencies. * No appointment is needed to use the online travel bookings. * People may feel more free and comfortable on using the travel agent system as there is no time limit where it can be used. * People may not know how to use computers so they will not fell comfortable. * Moral aspects: * Some people may feel that this system is available to children and they may get access to some particular things which parents may feel uncomfortable with. * The travel agency system may be a popularity of travel agencies. ?? ?? ?? ?? Safina aziz ICT Coursework 1/4 ...read more.