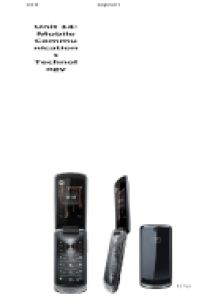 ﻿Unit 14 Assignment 1 Task 1 P1 ? identify different types of mobile communication devices. Mobile phones Mobile phones are portable telephones that don?t need landlines because they transmit frequencies to a tower to connect the call between the phones. Digital cordless phones Cordless phones are connected to the landline but they have a dock which the phone recharges its battery and the phone can be removed and taken with you, it uses short range radio when it?s out of its dock. Laptops Laptops are compact versions of a desktop they have a keyboard, mouse, audio and display all on one machine. Laptops have a battery and adjustable screens so they are useful for people on the move. Laptops use Wi-Fi to connect to the internet and may be attached with a dongle that could utilise 3g networks. Palmtops Palmtops are small computers that fit into your hand but can?t perform all the tasks a normal computer can but they are small and portable, they have a keyboard and can have slots to add disk drives, memory etc. Smartphones They are mobile phones with many features which a computer system has including: browsers, games, applications (Facebook, YouTube etc.) calculators, notepad and the list keep growing. Tablets A type of computer that has an LCD screen similar to the Smartphone it is a bit bigger and the outline looks like a slab the input device is a touch screen that you can use your fingers to navigate around the menu. P2 ? describe the features of different types of mobile communication devices. GPS Tracks your location no matter where you are or what time of day it is, there are 24 satellites in orbit, they are spaced out so that four will always be above the horizon. Accelerometer Can tell when the device is tilted, rotated or moved. iPhones use a three way axis device and many applications utilise this to measure speed and other things. ...read more.

The signal can be dropped at times like when going under a tunnel especially while using 3G. Some places do not even support 4G yet and still use 3G making 4G enabled phones useless. Wi-Fi This enables compatible devices to connect wirelessly to the internet either through your home network or via a Wi-Fi hotspot. This is usually much faster than connecting over a mobile network and won?t use up any data allowance you may have on your mobile contract. Using Wi-Fi will drain the devices battery much more than if it was turned off because it keeps transferring data even if it is idle or constantly searching for new networks to join even while it is locked or there are none around wasting power. Face recognition The camera will be able to recognise the face and focus onto it for more detail and even be able to keep following it. Facial recognition can fail and make the image look really fuzzy sometimes and you might not realise until you go back and view the image making you have to retake the picture if you still can. Zoe shot The HTC One has a feature which takes 20 still frames along with a 3 second video and also starts just before you fully press the button and also finishes 2 seconds after meaning that you are less likely to miss something that disappears. Having this extra feature can take up extra space on the memory and over time may fill up the memory. Retina display Is a feature on the apple devices which had more pixel density so that the screen looks better and the pixels can?t be seen from normal distance. The iPhone 5 has an IPS screen meaning that it can be viewed from different angles without looking out of colour. Gorilla glass Gorilla glass makes the screen much stronger making it less likely to break from falls or knocks and also makes the screen less likely to have less deep scratches that don?t go away. ...read more.

M2 ? Compare different mobile transmission technologies. 3G 4G Pros * Devices with 3G are cheaper than those with 4G built in. * 3G has been around for a while and has had its bugs/glitches sorted out. * Available in many more areas of the world than 4G is. * With 3G you can download more data with the same amount of money than if you were using 4G. * Backwards compatible to 2G networks Pros * Five times faster than 3G. * Potential speeds up to 300mbps. * Designed for data transmission so that online games work better and videos buffer faster even at a higher resolution. * Less latency compared to 3G. Cons * Up to 3.1mbps less than 4G. * Made for voice communications making it slower for other types of data. * Different countries use different frequencies so the 3G network may not be available. Cons * Can be up to 100mbps speeds but realistically you only get 3mbps - 5mbps. * Some carriers that provide 3G can have speeds that compare with 4G. * 4G is expanding but it is still not available all around the world. * 4G is new technology and may have a few glitches and bugs to start out with. Infrared Bluetooth Pros * Has higher security than Bluetooth because it requires direct line of sight unlike Bluetooth which can be detected by others in the area. * Infrared devices are cheaper Pros * Bluetooth can be used through objects, not requiring a clear line of sight. * Almost all Bluetooth devices can be paired together. * Range up to 30feet. * Can be connected to multiple devices. Cons * Infrared needs a clear line of sight to send data and anything blocking this will interrupt this e.g. someone walking past. * Has to be designed for specific devices or synced properly. * Can only be connected to one device at a time. Cons * A security risk called blue bugging where people can hack Bluetooth devices and use their credit to make phone calls and send texts | Page ...read more.