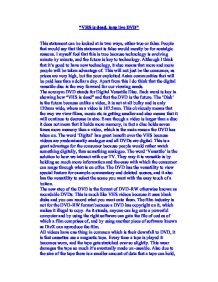 "VHS is dead, long live DVD" This statement can be looked at in two ways, either true or false. People that would say that this statement is false would mostly be for nostalgic reasons. I myself feel that this is true because technology is evolving minute by minute, and the future is key to technology. Although I think that it's good to have new technology, it also means that more and more people will be taken advantage of. This will not just be the consumer, as prices are very high, but the poor exploited Asian communities that will be paid less than a dollar a day. Apart from this I do think that the digital versatile disc is the way forward for our viewing needs. The acronym DVD stands for Digital Versatile Disc. Each word is key in showing how "VHS is dead" and that the DVD is the future. The 'Disk' is the future because unlike a video, it is not at all bulky and is only 120mm wide, where as a video is 187.5mm. ...read more.

The film industry is not for the DVD-RW format because a DVD has copyright on it, which makes it illegal to copy. As it stands, anyone can log onto a powerful computer and by using the right software can gain the file of codes of which a film comprises of, and by using another piece of software known as DivX can reproduce the film. All videos have one thing in common which is their downfall to DVD, it is that cassettes use a magnetic tape. Every time a tape is played it becomes worn, and the tape gets stretched ever so slightly. This wear damages the tape so much it's eventually made un-useable. Also due to the size of the tape there is a smaller amount of data that a tape can hold, this is not to be confused with the length of tape, but the added features, in particular, sound. With sound the videocassette can only reproduce Nicam stereo through the lines which make up your TV screen. Nicam stereo is not true stereo but an effect which falls you into thinking it's stereo. ...read more.

and region 2 Europe (PAL). There are other regions and they have nothing to do with the TV system used. Region 1 normally receives the DVD first due to actual release dates of the film. Region 2 is the next region for film release, which is why the format is changed from Region 1. That is you would be able to buy a Region 1 DVD before film release in Region 2, and therefore you would not visit the cinema. As the DVD is a digital format it is easier to break the region code. This can be done via hardware or software, these are known as multi-regional DVD players. You can buy multi-regional DVD players although they are not advertised, but the only way you can watch a Region 1 DVD on your TV by having a digital TV, this looks at the digital content and not the format (NTC/PAL) of the signal. Another advantage is the use of the pause/slow motion functions. They produce perfect pictures on the TV because they are a digital signal and therefore are decoded in the DVD players digit by digit. There is no tape being streched on the pause button, only a pause on the digital coding. ...read more.

The report describes how people are able to record DVDs with using a recordable disk, although there is a copyright issue. The film market is promoting an appropriate use of these disks, although there are now a number of people ...

The report describes how people are able to record DVDs with using a recordable disk, although there is a copyright issue. The film market is promoting an appropriate use of these disks, although there are now a number of people who record films using these disk which is illegal. This section is quite good, as this describes the drawbacks to DVD's. The report states how DVD's have different regions, and this is quite an in-depth description. This is quite good, as this shows the examiner detailed knowledge of this area.

The student states 'The Ã¢â‚¬ËœDiskÃ¢â‚¬â„¢ is the future because unlike a video, it is not at all bulky and is only 120mm wide, where as a video is 187.5mm.'. However what is this intended for? The report could include 'People's property now store a number of digital devices, and this reduces the space available for a number of consumer's. DVD's allows consumer's to store films easier and this would save space within a home environment'. This is similar with the other two words of 'Digital' and 'Versatility'.