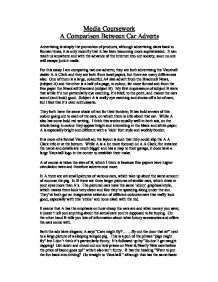 A Comparison Between Car Adverts

A Comparison Between Car Adverts

Advertising is simply the promotion of products, although advertising dates back to Roman times, it is only recently that it has been becoming more sophisticated.  It can reach us anywhere and with the advance of the Internet into our society, soon no one will escape junk e-mails.

For this essay I am comparing two car adverts; they are both advertising the Vauxhall dealer A A Clark and they are both from local papers, but there are many differences also.  One of them is a large, colourful, A4 size advert from the Bracknell News, (subject A) and the other is a half of a page, in colour, far more formal and from the free paper the Bracknell Standard (subject B).  My first impressions of subject B were that while it’s not particularly eye catching, it’s brief, to the point, and makes the cars sound (and look) good.  Subject A is really eye catching and shows off a lot of cars, but I feel that it’s over enthusiastic.

Both the ads have slogans; A says “Cars might fly?… …fly out the door that is!” next to a large picture of a sleeping winged pig.  This is a pun of the phrase “pigs might fly” but I don’t think it’s particularly funny.  It’s followed up by “So don’t get caught napping!  Get down and check out our low prices on New & Nearly New cars before the price of bacon goes up!” which also isn’t funny.  B has the heading “Want to put the fun back into driving?  Go straight to Vauxhall.” although that has the same basic message I think it sounds cleverer, is more to the point and doesn’t waste any space compared to the other.  It At the bottom of B there is a

While I except that A is really eye catching and that it does it’s job in that sense, I don’t really think it does it’s job in the advertising sense; it tries to be persuasive but for me it would just put me off.  B just tells you the solid facts, while A tells you a load of figures and boasts about their good value prices and how much you save.  They could be true but they certainly don’t have to be, sure B does quote prices but it just says the amount and moves on, it doesn’t try to say that they’re amazing or anything, which is why I prefer it.  If I really wanted a car I would look at B and see all the facts laid out for me.  It does its job entirely and on top of that it’s humorous.  Adverts really don’t need to tell us that products are better than other peoples, just the truth.