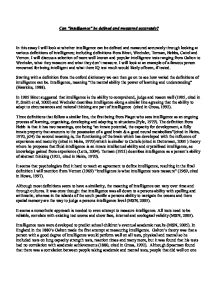 A typical intelligence test asks a variety of questions, many of which are of the type one learns to answer in school

Can “intelligence” be defined and measured accurately?

In this essay I will look at whether intelligence can be defined and measured accurately through looking at various definitions of intelligence; including definitions from Binet, Wechsler, Terman, Hebbs, Cattel and Vernon. I will discuss a selection of more well known and popular intelligence tests ranging from Galton to Wechsler, what they measure and what they don’t measure. I will look at an example of a famous person renowned for being intelligent and what there IQ test result would likely of been, if tested.

Starting with a definition from the oxford dictionary we can then go on to see how varied the definitions of intelligence can be. Intelligence, meaning “the mental ability the power of learning and understanding” (Hawkins, 1988).

In 1905 Binet suggested that intelligence is the ability to comprehend, judge and reason well (1905, cited in P, Smith et al, 2003) and Wechsler describes intelligence along a similar line agreeing that the ability to adapt to circumstances and rational thinking are part of intelligence  (cited in Gross, 1992).

Three definitions that follow a similar line, the first being from Piaget who sees intelligence as an ongoing process of learning, organising, developing and adapting to situations (Pyle, 1979).

One of the most widely used intelligence tests was developed by Alfred Binet who was the first to develop a test that correlated with academic achievement, which was later updated by Lewis Terman and named the Stanford-Binet Test. It is made up of a selection of tests covering comprehension, mathematics, word definition and reasoning, unfortunately they where all verbal tests, so did not cover a full range of abilities (cited in Berryman et al, 2002). Because the Stanford-Binet test was not appropriate for adults and depended on language ability David Wechsler(1939) decided to develop a test that had a verbal part consisting of comprehension, information, arithmetic, similarities, digit span, vocabulary and letter number sequencing and a performance part that consisted of digit symbol, picture completion, block design, picture arrangement, matrix reasoning, object assembly and symbol search, all tests could be scored separately or together to give an IQ score (1939, cited in E, Smith et al, 2003)

Most intelligence tests give a result of an IQ score (Intelligent quotient - which shows how a persons intelligence compares to the average person) which on a scale with 100 in the middle, and placing most of the population around the 100 mark between 85 and 115 as being of average intelligence, and below 70 as being of low intelligence or retarded and above 130 as highly intelligent (Davison et al, 2004).

1100 words  not including title and  references.