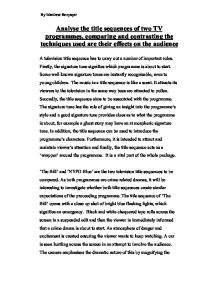 Analyse the title sequences of two TV programmes, comparing and contrasting the techniques used are their effects on the audience

Analyse the title sequences of two TV programmes, comparing and contrasting the techniques used are their effects on the audience

‘The Bill’ and ‘NYPD Blue’ are the two television title sequences to be compared. As both programmes are crime related dramas, it will be interesting to investigate whether both title sequences create similar expectations of the proceeding programme.

There is no emphasis on regular characters in ‘The Bill’s’ title sequence; instead the viewer is given a glimpse of anonymous characters. This suggests ‘The Bill’ is not a character led drama but is reliant on the storyline to involve the viewer. We glimpse a policewoman answering calls, symbolising that ‘The Bill’ will focus on real life issues in the day of the Metropolitan Police. There is no glamour or high action scenes. The camera tilts and focuses on a women being thrown into a cell by police officers. This image informs the audience that ‘The Bill’, the police, are in control and that justice will triumph over evil. The silhouetted faces and over-the-shoulder shot let the viewer know that ‘The Bill’ tells a story from a police point of view.

In the ‘NYPD Blue’ title sequence, there is much more focus on the main characters who are shown in various poses. Some are smiling, some are more serious and some are in control or danger. A cross-section of New York society in various poses is flashed across the screen. This emphasis on people suggests the ‘NYPD Blues’ is a character led crime drama about personal experiences.

The signature tune in ‘The Bill’ plays an effective role of drawing its audience to the programme.

After watching both title sequences, the viewers can have clear expectations of each proceeding programme. ‘The Bill’s’ title sequence gives a snapshot of a day in the life of the Metropolitan Police. The storylines will be grim with little humour and the emphasis is on the power of the police to solve crime. The expectations that are raised by the ‘NYPD Blue’ title sequence are that of a glamorous and laid-back police force, doing a difficult job in an exciting and sophisticated environment. Storylines will be fast and action-packed with a high level of excitement and featuring charismatic actors in the principal roles. Realism comes second to a glossily packaged product, which offers high entertainment and easily understood storylines.

Both title sequences work very well and give the viewer an instant glimpse of what lies ahead. However, the ‘NYPD Blue’ title sequence appears to have a more powerful effect on the viewer. It appears to be more sophisticated and in my opinion it does a better job at attracting its target audience and keeping them interested. ‘The Bill’, however, has a much more simplistic title sequence while still capturing every day Metropolitan Police life in the city of London. It provides an insight in the job of a policemen or policewoman. Viewers who enjoy crime drama will want to carry on watching.