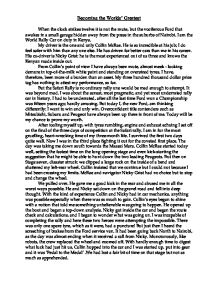 When the clock strikes twelve it is not the mute, but the vociferous Ford that awakes in a small garage hidden away from the press in the suburbs of Nairobi. I am the World Rally Car on duty in Kenya.

My driver is the one and only Collin McRae. He is so incredible at his job; I do feel safer with him than any one else. He has driven far better cars than me in his career. His co-driver is Nicky Grist: he is the most experienced out of us three and knows the Kenyan roads inside out.

From Collin’s point of view I have always been mute, almost meek - looking demure in top-of-the-milk white paint and standing on oversized tyres. I have, therefore, been more of a burden than an asset. My three hundred thousand dollar price tag has nothing to attest my performance, so far.

After tooling myself up, with tyres rumbling, engine and exhaust echoing I set off on the final of the three days of competition at the Safari rally. I am in for the most gruelling, heart-wrecking time of my three-month life. I survived the first two days quite well. Now I was in the third place fighting it out for the coveted first place. The day was taking me down south towards the Maasai Mara. Collin McRae started today well, setting the fastest time on the long opening stage and even kick-starting the suggestion that he might be able to hunt down the two leading Peugeots. But then on Stage seven, disaster struck: we clipped a large rock on the inside of a bend and shattered my left-rear wheel. Collin insisted that we continue but I could not because I had been crossing my limits.

There were still three more stages to go so the possibility of a podium finish had not yet faded. Our disadvantage was only a challenge of the moment. Collin kept pushing on and I co-operated with full spirit.

We managed to push hard enough to grab first place, on the very last stage of the day. We did end up on the podium with the victorious champagne fight; I won my first Rally championship event! Most certainly I was no longer that meek character that had stood behind Collin and Nicky: I was now standing beside them, up on the podium. I had not only won a glorious event but I had also won respect from my principals. As for my overconfident competitors they now know that I have just torn down their goal post and re-erected it in an area of the playing field that they did not even know existed.