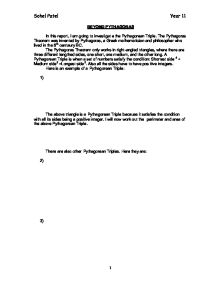 In this report, I am going to investigate the Pythagorean Triple. The Pythagoras Theorem was invented by Pythagoras, a Greek mathematician and philosopher who lived in the 6th centaury BC.

The Pythagoras Theorem only works in right-angled triangles, where there are three different lengthed sides, one short, one medium, and the other long. A Pythagorean Triple is when a set of numbers satisfy the condition: Shortest side2 + Medium side2 =Longest side2. Also all the sides have to have positive integers.

Here is an example of a Pythagorean Triple:

There are also other Pythagorean Triples. Here they are:

Both the triangles 2) and 3) are Pythagorean Triples because they satisfy the condition and all their sides have a positive integer.

Here is a table showing the results of the 3 Pythagorean Triples:

From the above table, I can see a few patterns emerging.

From now on, I am going to abbreviate each quantity and give it a symbol to make it easier for me. Here is a table of the quantities and the symbols that I am going to give them:

However, M and L are Quadratic sequences:

This is the nthterm formula to find out S:

This is the nth term formula to find out the M:

As it has been proved earlier that M+1=L, the formula for L will be the same as M plus 1:

Here are the formulas for each side:

I am now going to generate 3 more Pythagorean Triples using the formulae above.

Here is a table showing the results of the 8 Pythagorean Triples:

I am now going to show by algebraic manipulation, that S2+M2=L2:

Now, I will draw a table showing the results of the first 5 Pythagorean Triples.

As you can see from the above table, the patterns go on and not only that, other patterns have emerged. This is that the difference between M goes up in multiples of 8 each time, which is double to the multiples of 4 (in the difference), it went up by in the previous set.  Also, the Perimeters for these triangles are double to the previous set. I thought this would happen because I doubled all the three sides and so obviously, the Perimeters would double!

Again, S is a Linear sequence and M and L are Quadratic sequences:

This is the nthterm formula to find out S:

This is the nth term formula to find out the M:

As it has been proved earlier that M+2=L, the formula for L will be the same as M plus 2:

Here are the formulas for each side:

From this investigation I have learnt that other Pythagorean Triplet Families can be generated by using a different scale and that there are a lot of other families waiting to be investigated!