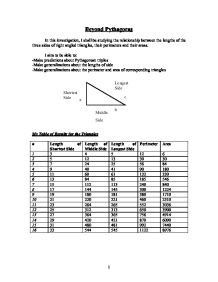 In this investigation, I shall be studying the relationship between the lengths of the three sides of right angled triangles, their perimeters and their areas.

I aim to be able to:

-Make generalizations about the lengths of side

-Make generalizations about the perimeter and area of corresponding triangles

My Table of Results for the Triangles

The reason I used certain triples in my table (for example there is also another triple for 9 as the shortest side which has 12 as the middle side length and 15 as the hypotenuse) is because they followed the pattern I was looking at. Even though some of the other triple combinations might have worked, I chose the ones out of them which went best with the other combinations. The 9,40,41 triple has a difference of 1 between its middle and longest side lengths, which is what the other triples I’d chosen have had, so it would be more reliable if I used the result which matched with my others instead of something completely different. If we wish to work out a formula, a general rule and a relationship then I am going to use the triple which is most likely to help with that.

I have worked out the formulae, using the term number (n) ,which the properties of the triangles can be found from.

It works for that one, as I can see on my table that with term 1, the middle side length is 4.

It works for that one, as I can see on my table that with term 2, the middle side length is 12.

It works for that one, as I can see on my table that with term 3, the middle side length is 24. 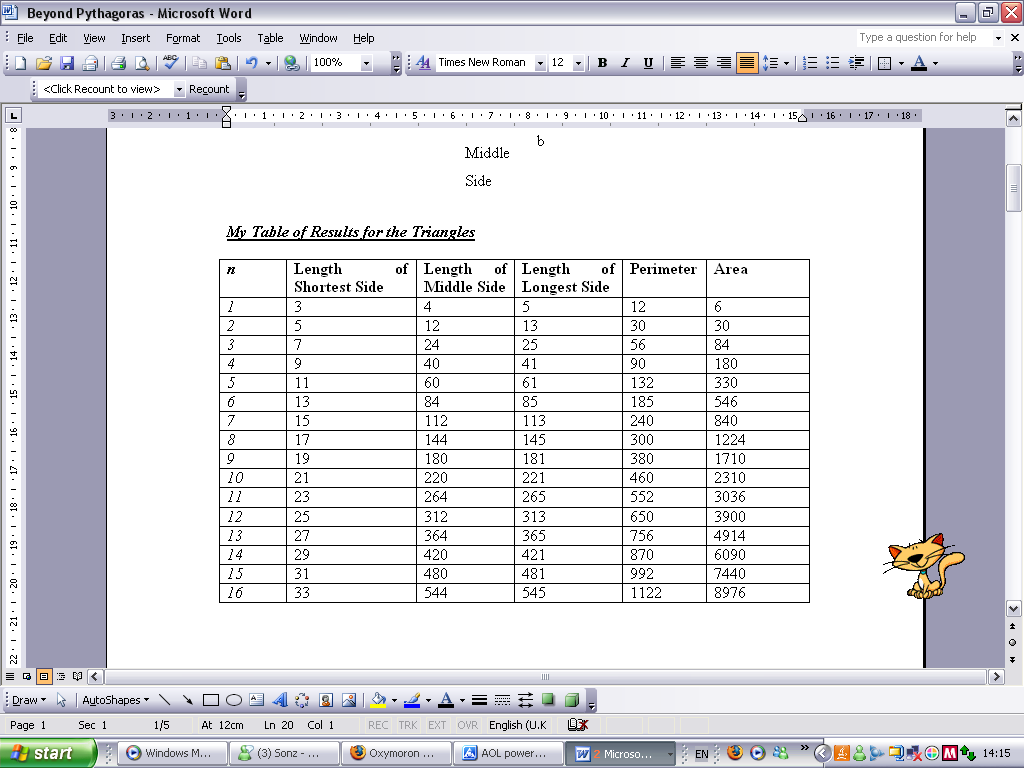 It works for that one, as I can see on my table that with term 1, the longest side length is 5.

It works for that one, as I can see on my table that with term 2, the longest side length is 13.

It works for that one, as I can see on my table that with term 3, the longest side length is 25.

I will now check my formulas work when substituted into a Pythagoras’ theorem.

And now I will substitute my numbers into the formula to check it works. I’m going to do it with the third term:

Which, once my formulas are substituted in,

I am pleased to have learnt that my formulae aren’t only limited to working with whole positive numbers, and can work with decimals too. This makes it far more useful than it would have been for just whole numbers. It is good to know that it is versatile as that makes it more usable. If I were to expand and develop my investigation further, I think I might have tried to find out what would happen f I doubled the size of the triangles, and then tried to work out formulas from them. I would be curious to know whether the same formula would also work for them, or whether a new one would need to be developed. I would also have maybe tried to find a working formula for triangles which are not right angled, as my formula is only limited to ones with a right angle. It would be a lot harder, but if I were to do this investigation, I would try to do that. If I were to re-do my investigation completely, I think I would try to include more testing, especially for the last ones, and include more results for the lengths, perimeters and areas than just going up to the 16th term. I think maybe going up to at least 30 could have been more beneficial.