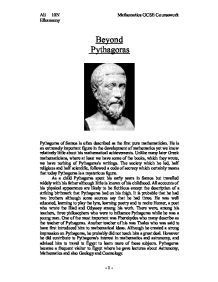 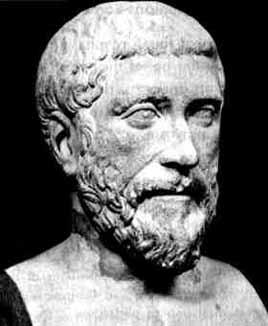 Pythagoras of Samos is often described as the first pure mathematician. He is an extremely important figure in the development of mathematics yet we know relatively little about his mathematical achievements. Unlike many later Greek mathematicians, where at least we have some of the books, which they wrote, we have nothing of Pythagoras's writings. The society which he led, half religious and half scientific, followed a code of secrecy which certainly means that today Pythagoras is a mysterious figure.

As a child Pythagoras spent his early years in Samos but travelled widely with his father although little is known of his childhood. All accounts of his physical appearance are likely to be fictitious except the description of a striking birthmark that Pythagoras had on his thigh. It is probable that he had two brothers although some sources say that he had three. He was well educated, learning to play the lyre, learning poetry and to recite Homer, a poet who wrote the Iliad and Odyssey among his work. There were, among his teachers, three philosophers who were to influence Pythagoras while he was a young man. One of the most important was Pherekydes who many describe as the teacher of Pythagoras. Another teacher of his was Thales who was said to have first introduced him to mathematical ideas.

These are the original formulas and I will be relating to them often later in this.

I worked these all out using the above technique and my observations proved to be correct. These formulas are the original formulas for the triples with odd smallest sides.

By looking at the table on the previous page, I also noticed something with the ‘b’ set of numbers. I looked for many paterns and I found out that,

Numbers in red are the triangle numbers,

numbers in blue are the next number in the column and therefore,

The middle length also has a 2nd difference of 4. Because it has gone to a second difference in order to gain a difference that is equal, it means that the formula for this column is a quadratic.

This proves that ‘b’ can be found by using the above formula and by using wither of the techniques that have been shown above.

It must be mentioned that for this General formula to work, ‘n’ must be a larger number than ‘m’ and all the numbers must be whole numbers.

This proves that the General Formula that I researched from various sources is correct and now this formula can be used to generate as many triples as you want that can satisfy Pythagoras’s Theorem.

I will give an example that forms the 12, 16, 20 triangle by using this formula.

I believe that this is enough proof that the General formula works and works on all the triples.

In conclusion I would like to point out that this has been both an exciting but also challenging task and I am greatly satisfied with my final project although I do feel that there is room for improvement.