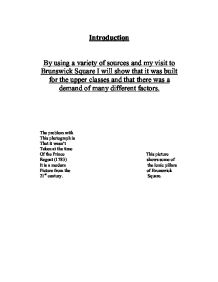 By using a variety of sources and my visit to Brunswick Square I will show that it was built for the upper classes and that there was a demand of many different factors.

By using a variety of sources and my visit to Brunswick Square I will show that it was built for the upper classes and that there was a demand of many different factors.

Taken at the time

Brighton was in an ideal situation, because it was close to London. One writer once wrote

“Several advantages weighed in Brighton’s favour. As opposed to the day or more, journey from London to Bath, the 65 miles carriage ride to Brighton only took five to six hours”.

This quote was not written at the time that Brunswick Square was lived in by the rich and famous, but it was quoted in the book “The regency Architect of Brighton and Hove” by E.Scott which had used a lot of old information. The book was written in 1984. Other reasons for Brunswick being situated in a good place were:

When George, Prince of Wales - later to become Prince Regent and then George IV - decided to make his home here, Brighton's popularity soared.
The town underwent an amazing transformation. Local people made money by providing bathing machines, which carried the bathers into the sea and bathing attendants’ known as 'dippers' stood by - ready to duck reluctant bathers. One of the most famous of these, Martha Gunn, is buried in St Nicholas churchyard.

Although well known for its connection with the Prince Regent, the first recorded Royal visitor was Charles II. After his escape from the Battle of Worcester in 1651, he hid from the Roundheads disguised as a servant. He stayed in the George Inn in West Street (later renamed the Kings Head) and escaped to France by boat, now celebrated every May with a race from Brighton to France, appropriately named the Royal Escape.

As Prince Regent, he gave lasting fame to Brighton as a resort after his arrival in September 1783. The Prince first occupied Grove House, and then the Marine Pavilion, commissioned from Henry Holland in 1787. George IV’s last visit to Brighton extended from January until the 7th of March 1827, ending an association with the town for nearly 44 years. The Prince regent has been said to be the reason for the design of Brunswick Square because of the way he built his palace.

This does mean that The Star of Brunswick was made as an inn for local servants because I strongly believe that Bingham would have researched a lot into the plans of Brunswick Square before making such a vital quote. He could be lying though because the quote is not from the time but I do not believe this is so.

When Busby was designing Brunswick Square it was also his job to design the service streets behind Brunswick square. As Bingham Wrote:

This quote tells you that Busby tried to make the service streets as narrow as possible because the glamour of Brunswick Square was on its outside facing the green no the inside (West and East Brunswick)  there was also a Riding Academy, that was in Lower Market Street and Waterloo Street. It was called Du Pont’s West Brighton Riding Academy. It hired and sold horses and carridges and provided stabling rooms for coachmen. The building was opened on 30th October 1828 as a market for Brunswick Square. The market was not very succesfull though.