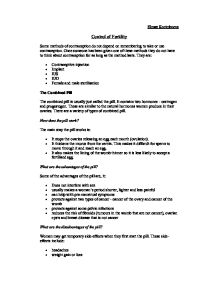 Elmaz Korimbocus Control of Fertility Some methods of contraception do not depend on remembering to take or use contraception. Once someone has been given one of these methods they do not have to think about contraception for as long as the method lasts. They are: * Contraceptive injection * Implant * IUS * IUD * Female and male sterilisation The Combined Pill The combined pill is usually just called the pill. It contains two hormones - oestrogen and progestogen. These are similar to the natural hormones women produce in their ovaries. There are a variety of types of combined pill. How does the pill work? The main way the pill works is: * It stops the ovaries releasing an egg each month (ovulation). * It thickens the mucus from the cervix. This makes it difficult for sperm to move through it and reach an egg. * It also makes the lining of the womb thinner so it is less likely to accept a fertilised egg. What are the advantages of the pill? Some of the advantages of the pill are, it: * Does not interfere with sex * usually makes a woman's period shorter, lighter and less painful * can help with pre-menstrual symptoms * protects against two types of cancer - cancer of the ovary and cancer of the womb * protects against some pelvic infections * reduces the risk of fibroids (tumours in the womb that are not cancer), ovarian cysts and breast disease that is not cancer What are the disadvantages of the pill? Women may get temporary side-effects when they first start the pill. These side-effects include: * headaches * weight gain or loss * nausea * breast tenderness * bleeding between periods * mood changes ...read more.

Often there are no symptoms, but some women may have pelvic pain. These cysts usually disappear without treatment. * If pregnancy does happen while you are taking the POP, there is a small risk of having an ectopic pregnancy. This is when the pregnancy develops outside your womb, usually in a fallopian tube. * Again, the POP does not protect against sexually transmitted infections. Contraceptive Implant An implant is a small flexible tube(s) which is placed just under the skin. It releases a progestogen hormone over a number of years. How does an implant work? Once again, it works very similarly to the other contraception above: the combined pill, the contraceptive injection and the POP. What are the advantages of an implant? Again, similar to the above contraception:- * There is no worry of contraception, for as long as it is in place. * It does not interfere with sex. * Normal level of fertility will return as soon as the implant is taken out. * It offers some protection against pelvic inflammatory disease. What are the disadvantages of an implant? * The menstrual cycle changes. In the first year of using an implant, most women have irregular bleeding. * Other possible side-effects include headaches, acne, putting on weight, tender breasts and bloating. * Very rarely, having the implant put in can cause an infection in the arm. * It can sometimes be difficult to remove the implant. * Some women may develop small fluid-filled cysts on their ovaries. The cysts are not dangerous and do not usually need to be treated. Often there are no symptoms, but some women may have pelvic pain. The Intrauterine System (IUS) An IUS is a small T-shaped plastic device which contains the hormone progestogen. ...read more.

Almost half of all IVF babies come from a multiple birth. This treatment option gives women with blocked, damaged, or missing fallopian tubes a chance at having a baby. Success rate Outcomes vary, depending on your particular fertility problem and on your age -younger women usually have healthier eggs and higher success rates. The national average success rate is around 17%. Disadvantages of IVF As the procedure often places more than one embryo in a woman's uterus, they have a higher than usual chance of having twins or triplets. Though many couples consider this a blessing, multiple pregnancies do increase the risk of miscarriage and other complications. The fertility drugs used to stimulate egg production can have severe side effects. Cancer may be another concern. IVF treatments also increase a woman's risk of ectopic pregnancy, where an embryo implants in a fallopian tube or a woman's abdominal cavity. The politics of IVF * Only 18% of IVF treatment is funded by the NHS and waiting times can differ greatly. * It can cost up to �2,000 per cycle for a couple to go private. * Most couples have three cycles at an average cost of �3,420. * One way of getting free treatment is for women to donate their eggs to other infertile couples. * Opponents of IVF argue that it 'falsely raises would-be parents' hopes that they will be able to have a baby when the chances are not that high.' * They also argue that it can be a 'traumatic experience to go through repeated IVF attempts, only to find that the woman does not get pregnant'. * Another possible drawback is the fact that IVF treatment increases the chance of having multiple births which the couple may not have planned for. * Some believe fertility drugs could cause ovarian cancer. ...read more.