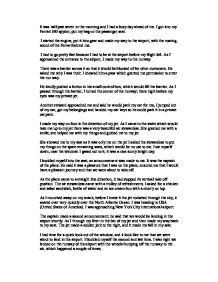 It was half past seven in the morning and I had a busy day ahead of me. I got into my Ferrari 360 spyder; put my bag on the passenger seat.

I started the engine, put it into gear and made my way to the airport, with the roaring sound of the Ferrari behind me.

I had to go pretty fast because I had to be at the airport before my flight left. As I approached the entrance to the airport, I made my way to the runway.

There was a barrier across it so that it would be blocked of for other customers. He asked me why I was their. I showed him a pass which granted me permission to enter the run way.

He kindly pushed a button in his small control box, which would lift the barrier. As I passed through the barrier, I turned the corner of the runway; there right before my eyes was my private jet.

Another steward approached me and said he would park my car for me, I jumped out of my car, got my belongings and handed my car keys so he could park it in a private car park.

The captain made a second announcement; he said that we would be landing in the airport shortly. As I through my litter in the bin of my jet and then made my way back to my seat. The jet made a sudden jerk to the right, and it made me fall in my seat.

I had time for a quick look out of the window, and it look like to me that we were about to land in the airport. I buckled myself the second and last time. I was right we landed on the runway of the airport with the wheels bumping off the runway to the air, which happened a couple of times.

When the jet came to a steady motion and then eventually stopped it was time for me to head into the city of New York. I headed for the exit of the airport, and there were flocks of taxis. It was evening in New York, Which was lucky for me as I had no other way of getting around New York.

I asked the driver if he could take me to the centre city of New York, 41st (street)

I wanted to get this done quickly so I handed the money over. The sales man was quite shocked; I signed the relevant paper work to show the car belonged to me. I had to sign another piece of paper, so it could be shipped to England and taken to my home. I handed more money to cover the cost of it arriving quickly and safely.

I got back to the taxi, he then drove me to the airport, so I could catch my flight. I got all my things and boarded they jet. I had some help by the air stewardess. I got to my seat. I buckled myself in the chair.

I woke, it was the air stewardess. She said we had arrived back into England. I must have dozed off. She helped with my belongings; I made my way off the jet. My Ferrari was waiting for me. The same gentle man who had parked it for me.

He handed over the keys, he asked if I had a pleasant journey. I replayed yes it was busy. I put my things into the car then headed home after a busy but enjoyable day.

This student written piece of work is one of many that can be found in our GCSE Pay Phone Problem section.