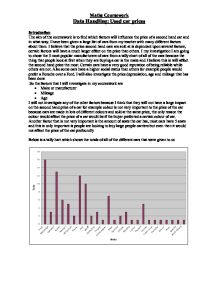 Maths Coursework Data Handling: Used car prices Introduction The aim of the coursework is to find which factors will influence the price of a second hand car and in what way. I have been given a large list of cars from my teacher with many different factors about them. I believe that the price second hand cars are sold at is dependant upon several factors, certain factors will have a much larger effect on the price than others. I my investigation I am going to chose the 3 most popular manufacturers of cars from a tally chart of all of the cars because the thing that people look at first when they are buying a car is the make and I believe this is will affect the second hand price the most. Certain cars have a very good reputation of being reliable while others are not. Also some cars have a higher social status than others for example people would prefer a Porsche over a Ford. I will also investigate the price depreciation, age and mileage that has been done So the factors that I will investigate in my coursework are * Make or manufacturer * Mileage * Age I will not investigate any of the other factors because I think that they will not have a large impact on the second hand price of a car for example ...read more.

The gradient for the Rover cars is 0.074 which is higher than the other 2 makes of car, this shows that the SHP of a car is varies on the make of the car. The Rover cars have a 17.66% standard deviation from the mean PPL which shows the price lost is more spread out than the other cars, for example there is one car that has a PPL of 23.20% and another that has a PPL of 87.65% this shows the results are very spread out Conclusion In conclusion given the time restraints that I have had I have been relatively successful in supporting my hypothesis. Given more time I could have investigated engine size because I think that is also an important factor. And I could have represented my data in different forms. In conclusion I have discovered that * There is positive correlation between the percentage price lost and the age of the car * There is positive correlation between the percentage price lost and the mileage * I have discovered that the cars lose the most value in the first 3 years (Ford, second hand price against age) * The make of the car affects the second hand price and the percentage price that is lost. ...read more.