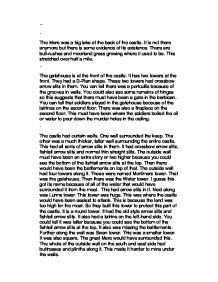 DEFENCES AT KENNILWORTH CASTLE THE GREAT MERE The Mere was a big lake at the back of the castle. It is not there anymore but there is some evidence of its existence. There are bull-rushes and moorland grass growing where it used to be. This stretched over half a mile. THE BARBICAN AND GATEHOUSE The gatehouse is at the front of the castle. It has two towers at the front. They had a D-Plan shape. These two towers had crossbow arrow slits in them. You can tell there was a portcullis because of the grooves in walls. You could also see some remains of hinges so this suggests that there must have been a gate in the barbican. ...read more.

Then there would have been the battlements on top of that. The outside wall had four towers along it. These were named Mortimers tower. That was the gatehouse. Then there was the Water tower. I guess this got its name because of all of the water that would have surrounded it from the moat. This had arrow slits in it. Next along was Lunns tower. This tower was huge. This was where the castle would have been easiest to attack. This is because the land was too high for the moat. So they built this tower to protect this part of the castle. It is a round tower. ...read more.

The keep had buttresses and plinths to hold the weight and make it harder to tunnel underneath. There were grooves in the wall suggesting there may have been a portcullis protecting the keep. There were three types of windows in the keep. These were round arch windows, square windows and fishtail arrow slits. The round arch windows and square windows were added at a later date for decoration. A clock was also put up outside the keep for decoration. The keep would have been taller because there were no battlements on the top. The keep roof was also missing. There was some evidence of habitation inside the keep. There were fireplaces, latrines, a stairway and a well. The keep had been altered. A lot of the arrow slits had been knocked out and bigger, decorative windows had been put in their place. ...read more.