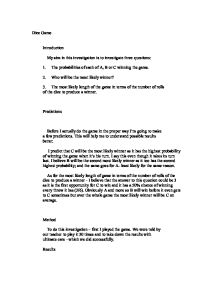 My aim in this investigation is to investigate three questions:

3.     The most likely length of the game in terms of the number of rolls

of the dice to produce a winner.

a few predictions. This will help me to understand possible results

of winning the game when it’s his turn. I say this even though it takes its turn

last. I believe B will be the second most likely winner as it too has the second

highest probability; and the same goes for A- least likely for the same reason.

and organised way I can come to a few conclusions. I believe at the present

moment C has the highest probability in winning – (29/60) overall confirms this.

Also another conclusion is that C was the most likely winner, I believe this

was because on each throw it took, it had a 50% chance of winning whereas this

had a reasonable 33.3% chance of winning each time it took a throw. I have a

good idea that this was the telling factor in the results that I took down. I think

that due to the percentage chance of winning C won the most and A the least.

I am finding that trends are beginning to appear in the results. For a start from

it won thirteen out of fifteen times it won, on its first throw (the third throw).

game’s third throw). This was the main reason I decided that three rolls was the

So, to sum up my answers are as follows:

conclusions that seem to be getting towards firm conclusions, which I can rely

on. I believe my experiment to be fairly reliable because I took the results down

carefully and accurately. Also I collaborated my results with someone else to

give me a more reliable look at my results and confirm any possible patterns.

This made it increasingly reliable.

been. Although one could argue playing the game over and over again may not

help or influence any conclusions that one’s already drawn up. Also maybe I

of my investigation and give me a clearer idea of a firmer conclusion.