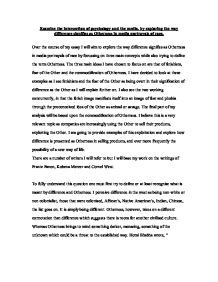 Examine the intersection of psychology and the media

Examine the intersection of psychology and the media, by exploring the way difference signifies as Otherness in media portrayals of race.

Over the course of my essay I will aim to explore the way difference signifies as Otherness in media portrayals of race by focussing on three main concepts while also trying to define the term Otherness. The three main ideas I have chosen to focus on are that of fetishism, fear of the Other and the commodification of Otherness. I have decided to look at these examples as I see fetishism and the fear of the Other as being overt in their signification of difference as the Other as I will explain further on. I also see the two working concurrently, in that the fetish image manifests itself into an image of fear and phobia through the preconceived idea of the Other as animal or savage. The final part of my analysis will be based upon the commodification of Otherness. I believe this is a very relevant topic as companies are increasingly using the Other to sell their products, exploiting the Other. I am going to provide examples of this exploitation and explore how difference is presented as Otherness in selling products, and ever more frequently the possibility of a new way of life.

There are a number of writers I will refer to but I will base my work on the writings of Frantz Fanon, Kobena Mercer and Cornel West.

To fully understand this question one must first try to define or at least recognise what is meant by difference and Otherness. I perceive difference in the west as being non-white or non colonialist, those that were colonised, African’s, Native American’s, Indian, Chinese, the list goes on. It is simply being different.

Bowling For Columbine (2002) provides a usual visual representation of this where he cuts between a news report of an invasion of African killer bees which, so say the reporter, are more aggressive and are distinguishable by their larger body parts. This is being shown concurrently with news reports of black male’s committing violent crimes, cleverly linking the idea of the black male’s superior physicality and thus the fear of it.

Living in contemporary western society where there is no longer the physical enslavement of black people by white, it is strange how such racist undercurrents can exist.  There must be a basis for these unconscious thought patterns, they could not have simply appeared from nowhere. I have decided to study an exert from Frantz Fanon’s Black Skin White Masks to examine this problem.

“Look a Negro!” It was an external stimulus that flicked over me as I passed by. I made a tight smile.

“Mama, see the Negro! I’m frightened!” Frightened! Frightened! Now they were beginning to be afraid of me.[9]

The boys reaction is a typical reactionary identification of a black male by someone from a negrophobic society. At first he seems to express intrigue, amazement or wonder but within a few moments this becomes fear. His wonder has become fear through the image of the black man as a savage who acts in threatening ways. This image or as Fanon calls it “ racial epidermal schema” has been constructed through history, stories and legends of the black male acting in such ways.