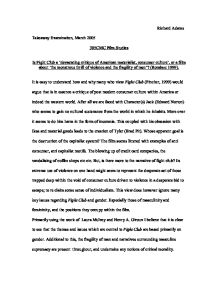 Fight Club a 'devastating critique of American materialist, consumer culture', or a film about 'the monstrous thrill of violence and the fragility of men'? (Rombes: 1999).

Is Fight Club a ‘devastating critique of American materialist, consumer culture’, or a film about ‘the monstrous thrill of violence and the fragility of men’? (Rombes: 1999).

It is easy to understand how and why many who view Fight Club (Fincher, 1999) would argue that is in essence a critique of post modern consumer culture within America or indeed the western world. After all we are faced with Character(s) Jack (Edward Norton) who seems to gain no cultural sustenance from the world in which he inhabits. More over it seems to do him harm in the form of insomnia. This coupled with his obsession with Ikea and material goods leads to the creation of Tyler (Brad Pit). Whose apparent goal is the destruction of the capitalist system? The film seems littered with examples of anti consumer, anti capitalist motifs. The blowing up of credit card companies, the vandalising of coffee shops etc etc. But, is there more to the narrative of fight club? Its extreme use of violence on one hand might seem to represent the desperate act of those trapped deep within the void of consumer culture driven to violence in a desperate bid to escape; to re claim some sense of individualism. This view does however ignore many key issues regarding Fight Club and gender. Especially those of masculinity and femininity, and the positions they occupy within the film.

Primarily using the work of  Laura Mulvey and Henry A. Giroux I believe that it is clear to see that the themes and issues which are central to Fight Club are based primarily on gender.

Fight Club trying to suggest that each member of staff in the Sarbucks they attacked now has the chance to go and achieve what they individually want to achieve? If that is the case isn’t the end result a society based on competition and economical survival of the fittest? Is that the essence of capitalism? Don’t we have that now? Or is the actual point that it is alright to compete and achieve our goals; as long as it is only the men doing it? “Fight Club functions less as a critique of capitalism than as a defence of authoritarian masculinity” (Giroux, 2000:10) When Tyler Put the Gun to Raymond the clerks head he may as well have come right out and said “you are a man you shouldn’t be doing such degrading work-that is for women to do”.

The roles on which men and women are often portray within film narratives is an area which Laura Mulvey has explored in her essay (first published in 1975) ‘Visual Pleasure and Narrative Cinema’. Within this piece of work Mulvey outlines that both men and women occupy different areas of the text. Women are defined by Mulvey as being the “object of the look and men as being in control of the gaze” (Nelmes, 2003:254). This in essence places the men and women as being in binary opposition to one another. This is not to suggest that men are not looked at during the film of course this would be futile. But what Mulvey suggests is that the men are looked at by other men, not in terms of object but as a projection of who we would like to be.

“In Short, Fight Club provides no understanding of how gendered hierarchies mediated by misogynist psychic economy encourages male violence against women. In short, male violence in this film appears directly linked to fostering those ideological conditions that justify abuse towards women by linking masculinity exclusively to expressions of violence and defining male identity against everything that is feminine. (2000:12)