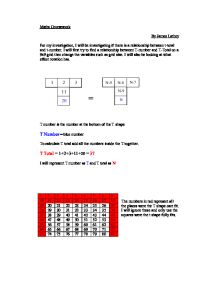 To calculate T total add all the numbers inside the T together.

The numbers in red represent all the places were the T shape cant fit. I will ignore these and only use the squares were the t shape fully fits.

First I put the T shape onto my 9x9 grid and translated it right by 1 space each time.  As shown above I started on 20 and finished on 25 I then constructed the tale below.

The table above shows the difference between the consecutive T-Totals as the T-Number increases by one. On the above 9x9 grid, the T-Shapes can be seen being translated across the 9 x 9 grid by one square each time. There is a pattern between the T-Totals as the T-Shape is translated each time, as each time the T-Total increases by 5, as shown in the table above.

The T-Total for this shape is 42 when calculated. When put into the formula it becomes 5(7) + 7 which also equals 42. This proves my theory that:

The calculated T-Total for this T-Shape is 57 and the T-Total when put into the formula above also equals 57. This proves that

In this investigation I have successfully established a relationship between T-Total and Grid size, and found a rule for grids ranging from 9-14. I have also found a general rule which will find the T-total for any grid size. I then move onto rotations I looked at 90˚, 180˚, 270˚ and 360˚, I worked out my formulas for rotating the T-shape on a 6x6 grid and successfully found and tested and proved my formula correct. Overall I think the investigation went well.

If I was to do the investigation again I would do grid rotations on larger grid sizes and make a general rule for rotating the T- shape.