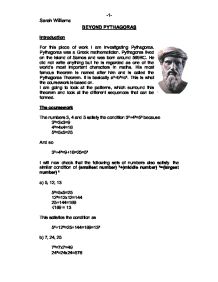 For this piece of work I am investigating Pythagoras. Pythagoras was a Greek mathematician.

For this piece of work I am investigating Pythagoras. Pythagoras was a Greek mathematician. Pythagoras lived on the island of Samos and was born around 569BC. He did not write anything but he is regarded as one of the world’s most important characters in maths. His most famous theorem is named after him and is called the Pythagoras Theorem. It is basically a²+b²=c². This is what the coursework is based on. 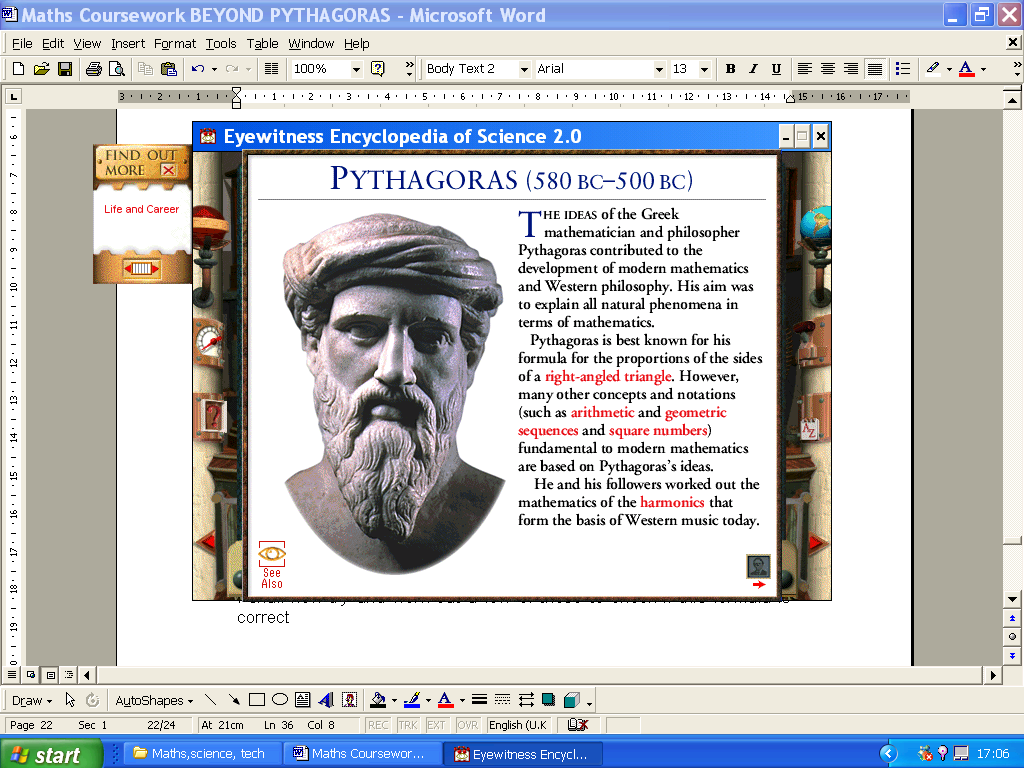 I am going to look at the patterns, which surround this theorem and look at the different sequences that can be formed.

The numbers 3,4 and 5 can be the lengths – in appropriate units – of the side of a right-angled triangle.

The perimeter and area of this triangle are:

The numbers 5,12,13 can also be the lengths – in appropriate units – of a right-angled triangle.

I have put these results into a table to see if I can work out any patterns.

I will assume that the hypotenuse has length b + 1 where b is the length of the middle side.

Another pattern that I have noticed is that there must be a connection between the sides of the triangle because the middle side and the longest side have a difference of one. I will now try and work out the formula. I will basically use trial and error and try out different formulae that I think of.

I already know that this is correct because it is Pythagoras theorem. However I will still check it using the Pythagorean triple 3,4,5.

I know that this is correct because

To see if this statement is true I shall use the Pythagorean triple 9,40,41.

This is not true because

which add together to make 3281

This means that this is not a correct formula.

This is wrong as

The middle side = 113 this formula has to be wrong.

Shortest side x longest side = (middle side) ²

To check this I will use the Pythagorean triple 7,24,25

This is wrong because

(Longest side) ²-(middle side) ²=shortest side

To check this formula I will use the Pythagorean triple 5,12,13

This is right as

So this formula is correct

(Middle side) ²+Smallest side=Largest side

This is silly and I shouldn’t really have tried it, as I should have been able to work out that this formula is incorrect just by looking at the numbers involved. 144 is bigger than 13 without adding the 5.

Largest side + Middle side = (shortest side) ²

To check this I will use the Pythagorean triple 3,4,5

Just to check that this formula works with all triples I shall pick 3 random numbers from the N column of the table and use the formula with them. I shall use (i) 23 (ii) 10 (iii) 16

This seems to be a correct formula.

So the formulae  I have worked  out in this section are:

All these are based on the assumption that the difference between the longest side and the middle side is 1.

However, I am interested about what happens when the difference between the longest side and the middle side is different from 1. I shall investigate this going up to c=b+10.

In the next few investigations I was required to work out the square roots of numbers. However, although it is possible to work out a square root of every number I chose only to investigate the perfect squares. Those numbers which are whole numbers. This is because I am only investigating Pythagorean triples with positive integers.

I will now investigate when longest side – middle side=3. (c-b=3)

I will now investigate when longest side – middle side=4. (c-b=4)

I will now investigate when longest side – middle side=5. (c-b=5)

An interesting thing I found on the Internet, which I had never heard of before, was Pythagorean Quads (quadruples).

Pythagorean quads are the 3D version of the triples and can all be generated by the following formula, where a, b, c and d are whole numbers.
If p = a
2 + b2 - c2 - d2

From looking further on the Internet for confirmation I conclude that this formula does work because the quad that I worked out above is correct.

I started this investigation by noticing that there was a difference of 1 between the middle side and the longest side. I then went on to work out formulae relating to this. All these formulae were based on the assumption that c-b+1. however after investigating further I realised that the difference between the middle side and the longest side could be any number. So I investigated all the differences up to a difference of 5. I decided that I would stop each table at the value of b=25. I realised that this investigation could go on forever and you could investigate unlimited values of b and  there are unlimited differences that I could have investigated but I had to set a limit. I also decided that I would only investigate up to c=b+10 as I felt that was a sufficient number of investigations. I wrote the extension because I thought it was interesting to see what else other people had discovered